5 Things About Ebola You Should Know 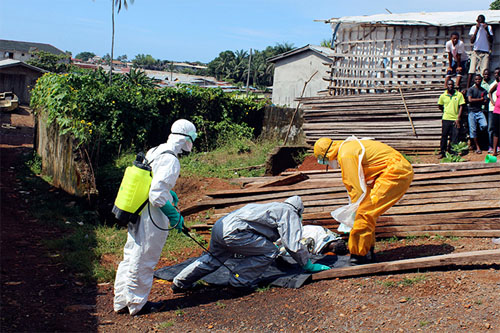 The UN’s health watchdog, the WHO, says there are 60 days left to contain the Ebola outbreak, which has already claimed almost 5,000 lives. This is what you need to know about the killer virus.

1. It has been here for decades:

The virus lives naturally in animals, mostly in sub-Saharan Africa. The first two recorded outbreak were in 1976. The Ebola virus (EBOV) is one of five members of the Ebolavirus genus, four of which cause lethal hemorrhagic fever. It was previously called Zaire virus, after the country that is now called the Democratic Republic of Congo.

There are currently two separate Ebola outbreaks underway. In addition to the one in Western Africa, which has already spread to the US and Europe, there is another one in the Congo.

Bats are the natural reservoir of the virus, because they can carry it without getting ill. Apes can suffer from it too. Humans may get infected by eating bushmeat or through feces, after which the virus can spread from human to human via blood, saliva and other fluids.

Ebola’s high mortality rate and gruesome symptoms have given it the air of something out of a horror movie. But statistically speaking, the virus was a minor threat, with outbreaks quickly fading out claiming a few hundred lives at most. So it’s not surprising that institutions researching infectious diseases never invested many resources into finding a cure, preferring to spend money on more wide-spread (and, cynically speaking, more profit-generating) threats.

The exception to that are bioweapons specialists, who concluded that the virus that could not go airborne and is an ineffective means to attack the enemy (or serve as a weapon for terrorists, for that matter). So when the current outbreak started beating records – in fact killing more people than all previous outbreaks combined – and spreading into cities, nobody had a working treatment at hand. A handful of experimental vaccines are in the pipeline, including three developed in Russia. But they are far from being mass produced, while the virus is spreading.

The countries affected by the current outbreak are poor, their healthcare systems are rudimentary, and the tradition-dictated hygiene habits of many of its citizens are not suitable for stopping the infection.

Where Western countries can rally experts in biohazard suits, quarantine every person a suspected carrier had contact with and run blood tests, countries like Guinea,

Sierra Leone, and Liberia have neither the resources nor experience to take such measures. And the problems only start with healthcare: the epidemic spreads panic, fear and violence, causing deterioration in whatever social order is in place.

The assistance from international organizations helps a lot, but it’s not a magic wand that can stop the outbreak with a deft wave. Organizations like the WHO have their difficulties too. For instance, the UN’s health body had its budget cut, leaving it with less than $4 billion to spend in 2013-2014. In contrast, the budget of the US agency tackling infections, the CDC, was about $6 billion in 2013.

Just like scientists researching treatments, doctors preventing them in the field have to prioritize. Ebola was not a priority, and the outbreak went under the radar for an estimated three months, before it was declared as such by Doctors Without Borders. By that time it was already in Guinea’s capital Conakry, a city of 2 million people.

4. The West is not prepared:

Or at least not as well prepared as it should be! Even if Ebola manages to get into developed nations with some travelers slipping through airport cordons, the spread of the virus would not be large. It takes between four to 21 days for an infected person to become contagious, which means once a case is discovered, everyone who had contact with the person can be quarantined and tested before they can spread the disease.

But being among the few unlucky victims is little consolation for those who do get infected. And the fact that in the US and Spain, health workers who provided care to known Ebola sufferers got infected, despite knowing what they were dealing with, is less than reassuring.

In both countries there is criticism over how the treatment of Ebola patients is conducted and how reports of new suspected cases have been responded to.

Battling the outbreak is difficult and costly. The WHO estimates that by November there could be 10,000 new cases of the disease each week in two months, unless it’s taken under control. This would require having 70 percent of infected people in a care facility and 70 percent of burials done without further infections. Otherwise the breakout would reach a stage, for which there is no plan. The World Bank says in the worst case scenario the economic damage from the epidemic could reach $33 billion.

The US Department of Defense said it needs over $1 billion to cover the cost of the effort to fight the disease in Africa. It may send as many as 3,000 soldiers to the epidemic zone, with an estimated cost of $750 million over a six-month period. Other states, world bodies and charities have promised to chip in to stem the tide of the developing outbreak and provide aid to the most afflicted West African nations. In September, the European Union pledged 150 million euros to fight the virus in West Africa. The World Bank Group has pledged US $230 million in emergency funding to help Guinea, Liberia, and Sierra Leone contain the spread of Ebola infections.

Last month the Bill & Melinda Gates Foundation released $50 million to the UN and other international aid agencies working to contain the epidemic. The International Committee of the Red Cross, in tandem with the Red Cross and Red Crescent societies, has set aside 34.7 million Swiss francs to tackle the epidemic as well. The price tag of developing and distributing drugs, however, is less than one would expect.

Ripley Ballou, who heads the Ebola vaccine program for GSK, estimated the company could make 100,000 to 500,000 doses for just $25 million. The problem: it would take around 9 months. In any such epidemic, however, the real cost comes not from the cure, but treating the consequences of human fear, WHO director general Margaret Chan said. According to Chan, 90 percent of the economic costs incurred from any such outbreak . -rt

Mobile Phone Services to be Suspended in Karachi Tomorrow

Mobile Phone Services to be Suspended in Karachi Tomorrow