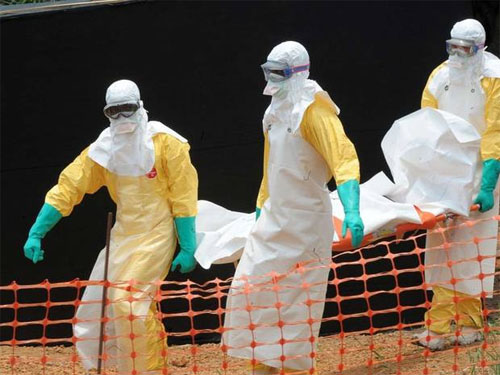 Ebola virus disease (EVD), Ebola hemorrhagic fever (EHF) or simply Ebola is a disease of humans and other mammals caused by an ebolavirus. Symptoms start two days to three weeks after contracting the virus, with a fever, sore throat, muscle pain and headaches.

Typically, vomiting, diarrhea and rash follow, along with decreased function of the liver and kidneys. Around this time, affected people may begin to bleed both within the body and externally.

The virus may be acquired upon contact with blood or other bodily fluids of an infected human or other animal.Spreading through the air has not been documented in the natural environment. Fruit bats are believed to be the normal carrier in nature, able to spread the virus without being affected. Humans become infected by contact with the bats or living or dead animals that have been infected by bats. Once human infection occurs, the disease may spread between people as well. Male survivors may be able to transmit the disease via semen for nearly two months. To diagnose EVD, other diseases with similar symptoms such as malaria, cholera and other viral hemorrhagic fevers are first excluded. Blood samples are tested for viral antibodies, viral RNA, or the virus itself to confirm the diagnosis.

Outbreak control requires a coordinated series of medical services, along with a certain level of community engagement. The necessary medical services required include rapid detection and contact tracing, quick access to appropriate laboratory services, proper management of those who are infected, and proper disposal of the dead through cremation or burial. Prevention includes decreasing the spread of disease from infected animals to humans. This may be done by only handling potentially infected bush meat while wearing proper protective clothing and by thoroughly cooking it before consumption. It also includes wearing proper protective clothing and washing hands when around a person with the disease. Samples of bodily fluids and tissues from people with the disease should be handled with special caution.

No specific treatment for the disease is yet available.Efforts to help those who are infected are supportive and include giving either oral rehydration therapy (slightly sweet and salty water to drink) or intravenous fluids. This supportive care improves outcomes. The disease has a high risk of death, killing between 25% and 90% of those infected with the virus (average is 50%). EVD was first identified in an area of Sudan that is now part of South Sudan, as well as in Zaire (now the Democratic Republic of the Congo). The disease typically occurs in outbreaks in tropical regions of sub-Saharan Africa. From 1976 (when it was first identified) through 2013, the World Health Organization reported a total of 1,716 cases. The largest outbreak to date is the ongoing 2014 West African Ebola outbreak, which is currently affecting Guinea, Sierra Leone, Liberia, and Nigeria. As of 10 October 2014, 8,376 suspected cases resulting in the deaths of 4,024 have been reported. Efforts are under way to develop a vaccine; however, none yet exists.

Signs and symptoms of Ebola virus disease (EVD) usually begin suddenly with an influenza-like stage characterized by fatigue, fever, headaches, and pain in the joints, muscles, and abdomen. Vomiting, diarrhea, and loss of appetite are also common. Less common symptoms include the following: sore throat, chest pain, hiccups, shortness of breath, and trouble swallowing. The average time between contracting the infection and the start of symptoms (incubation period) is 8 to 10 days, but it can vary between 2 and 21 days. In about 5-50% of cases, skin manifestations may include a maculopapular rash (a flat, area on the skin that can be red in white skinned people covered with small joined bumps). Early symptoms of EVD may be similar to those of malaria, dengue fever, or other tropical fevers, before the disease progresses to the bleeding phase. In 40–50% of cases, bleeding from puncture sites and mucous membranes (e.g., gastrointestinal tract, nose, vagina, and gums) has been reported. In the bleeding phase, which typically begins five to seven days after first symptoms.

internal and subcutaneous bleeding may present itself in the form of reddened eyes and bloody vomit. Bleeding into the skin may create petechiae, purpura, ecchymoses, and hematomas (especially around needle injection sites). Sufferers may cough up blood, vomit it, or excrete it in their stool. Heavy bleeding is rare and is usually confined to the gastrointestinal tract. In general, the development of bleeding symptoms often indicates a worse prognosis and this blood loss can result in death.

All people infected show some signs of circulatory system involvement, including impaired blood clotting. If the infected person does not recover, death due to multiple organ dysfunction syndrome occurs within 7 to 16 days (usually between days 8 and 9) after first symptoms.

Ebola virus is caused by four of five viruses classified in the genus Ebolavirus, family Filoviridae, order Mononegavirales. The four disease-causing viruses are Bundibugyo virus (BDBV), Sudan virus (SUDV), Taï Forest virus (TAFV), and one called, simply, Ebola virus (EBOV, formerly Zaire Ebola virus). Ebola virus is the only member of the Zaire ebolavirus species and the most dangerous of the known EVD-causing viruses, as well as being responsible for the largest number of outbreaks. The fifth virus, Reston virus (RESTV), is not thought to be disease-causing in humans. These five viruses are closely related to marburgviruses.