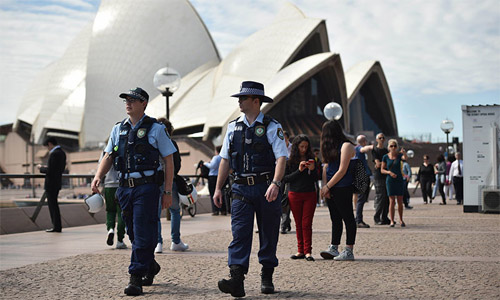 Australia’s Islamic leadership called for restraint on Wednesday as it emerged that Muslims and mosques had been targeted in a backlash over fears about potential terror attacks.

Lawyer Mariam Veiszadeh from the Islamophobia Register told reporters that in recent days a pig’s head had been impaled on a cross, mosques vandalised and threatening messages spray-painted on property and cars.

“A number of women, particularly in hijab, and children have been verbally abused and threatened,” she said. “In one case a western Sydney mother and her baby were spat on and her pram kicked. In another, a man in Perth tried to rip the scarf off a woman’s head.” Australia has raised its terror alert and is tightening its counter-terror laws, aware that some 60 of its citizens have gone to fight alongside militants in Iraq and Syria and could return. On Tuesday a Muslim teenager was shot dead by police in Melbourne after stabbing two officers, just days after authorities carried out raids in Sydney and Brisbane to disrupt an alleged plot by Islamic State supporters to abduct and behead a member of the public.

The IS group has also issued a call for Muslims to indiscriminately kill Australians, in a message which also mentioned the US, Canada and France. Australian authorities are taking it seriously. The grand mufti of Australia, Ibrahim Abu Mohammed, and other religious leaders Wednesday called on the Muslim community to reject IS, which has seized swathes of Iraq and Syria and declared an Islamic “caliphate”. “The recent so-called fatwa from overseas, making reference to Australia as a target, has no religious authority and must be rejected,” they said in a statement. “We call on everyone to exercise restraint and civility.

We must not let emotion take over common sense.” The death on Tuesday of 18-year-old Abdul Numan Haider has raised concerns about a further backlash against Muslims. The Islamic Council of Victoria said it had already received threats “expressing views I would find absolutely abhorrent” in the wake of the incident, secretary Ghaith Krayem told reporters. “Our society as a whole is feeling quite anxious, and fearful, and it only takes something of this nature to lose a lot of the goodwill built up in the community over a number of years,” he said.

Police said they had briefed Muslim leaders shortly after Tuesday’s shooting and would strive to keep communications open. “There will be race tensions, there is no doubt about that,” said Victoria Police chief commissioner Ken Lay. “It is absolutely critical that we give the faith communities in Victoria support, and information, that we allow them to share their concerns with us. “ -dawn