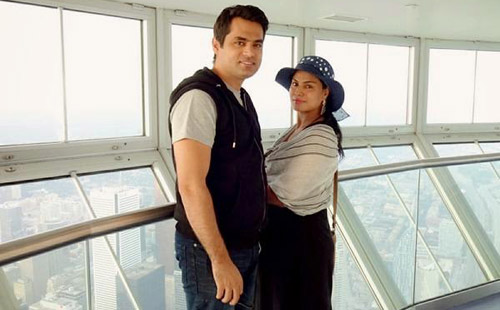 Pakistani actor Veena Malik on Tuesday gave birth to a baby boy in the United States. Veena’s husband Asad Bashir Khattak took to Twitter to announce the news of the couple’s bundle of joy:

Veena also tweeted the photo of her husband cradling the new-born baby on her official Twitter account. Speaking to Media  via telephone, Veena said she was in good health but was too exhausted to speak.

“She is doing pretty well. We are happy that we are here. She is trying to sleep,” Khattak said. “We have named him Abram Khan Khattak. It is the name of Shahrukh Khan’s son as well. In Hebrew and Arabic, it is Ibrahim.”

Asad said that the couple were supposed to name him Arham but decided to change it to Abram. The baby also has to his credit an official Twitter handle which goes by the name of iAbram Khan and the first tweet on the account says:

Welcome me World…I have Arrived  Veena, known to make headlines and court controversy, returned to Pakistan in May 2014, following a long stint in neighbouring India’s Bollywood industry and had claimed to have undergone “a change within” after marrying singer and businessman Asad Bashir Khan. Months earlier, the actor had also caused a stir with her apparently anti-Indian remarks which were taken as an indication of her return to her native country. The star entered a controversy in 2011 when semi-nude photos of her were published in Indian magazine FHM with the initials of Pakistan’s premier intelligence agency appearing on her arm.

She had sued the magazine for damages claiming the published image had been morphed without her knowledge. The actor made her debut in 2000 and since then has appeared in a number of Pakistani films and tv programmes.

After moving to India she performed in many commercially successful movies including, Daal Mein Kuch Kaala Hai, Zindagi 50-50, Super Model and Kannada. She also appeared in a season of Indian reality show Big Boss. -dawn