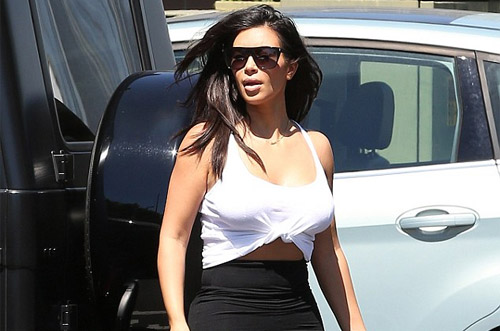 Los Angeles currently is experiencing a sweltering heat wave. And Kim Kardashian raised temperatures further as she stepped out in a very titillating outfit. The 33-year-old showed off her incredible curves in a high-waisted skirt paired with a white crop top as she headed into a sound studio on Wednesday.

The reality star looked sensational in the figure-hugging black skirt and low-cut top, which she tied in a knot at her waist. She added further glamour with strappy brown heels and large sunglasses, keeping the rest of her accessories to a minimum.

Kim Kardashian wore her dark hair loose and glossy and opted for a nude lipstick Kim and her husband Kanye West returned on Tuesday from a whirlwind trip to Australia where the Yeezus star was performing. But it was back to the business for the superstar couple despite their jetlag.

Doting Kanye played driver, waiting in the car as he shepherded Kim from her dermatologist to a meeting, and onto dinner at Little Door in West Hollywood. No doubt the pair was glad to be home after not only a gruelling multi-city tour, but one that was plagued with controversy. During one of the concerts Kanye was accused of sending a security to check if people who were not standing up were in wheelchairs – with at least one of those targeted indeed in a wheelchair. A number of fans took to Twitter to express outrage after hearing the performer demand everyone stand up and dance.

Both Kim and Kanye have hit out at the criticism levelled at the Gold Digger hitmaker however, with Kim taking to social media as she flew out from Down Under. The star wrote: ‘What an amazing Australian tour! Its frustrating that something so awesome could be clouded by lies in the media.

Kanye never asked anyone in a wheel chair to stand up & the audience videos show that,’ she wrote alongside a video of her husband performing. He asked for everyone to stand up & dance UNLESS they were in a wheelchair.’

Her comments come after Kanye chose to ‘break down’ the moment in a speech made to his audience at his Brisbane show on Monday night. Addressing the crowd, the 37-year-old rap star said his actions had been misunderstood by critics: ‘At my concerts I make sure everybody has as good a time as possible. ‘So all this demonising me, it ain’t gonna work after a while. Pick a new target.

Pick a new target! Cos I’m not one of these dumba** artists that you’re used to. ‘You come to me, I’m gonna take my platform and I’m gonna break down this s**t down for real, intelligent people every night so they can understand.’ -dailymail