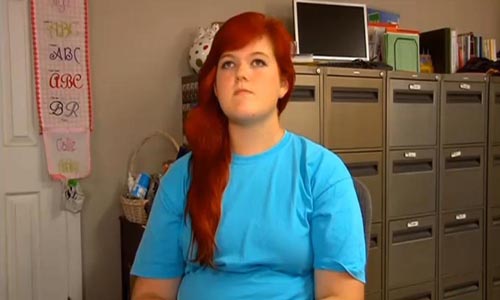 An Alabama teenager with dyed-red hair was sent home from school by her principal over concerns that her mane was too bright and distracting, according to the girl’s mother. Hayleigh Black, a 15-year-old student at Muscle Shoals High School in northwestern Alabama, had been dyeing her hair red for three years without incident until principal Chad Holden called her into his office last week, her mother said.

Black, who plays flute in the school’s marching band and spent her summer volunteering at a camp for children, was driven to tears after being sent home on what was her first day of 10th grade, her mother, Kim Boyd, said. “Her lips started quivering and her eyes started watering,” Boyd said. “I’m brokenhearted for my child that had her feet kicked out from under her on first day of school.”

School policy dictates that students cannot have an unnatural color that is distracting, Boyd said, adding that she had no problem upon learning that the principal had sent home kids sporting bright orange and purple hair. “But red is a natural human hair color,” she said. “It can be grown.” Boyd said she appealed to district administrators, including Superintendent Brian Lindsey, who was Black’s principal last year, without success. She has retained a lawyer, who has sent a letter asking that her daughter’s absence be erased from the record and that her red hair be allowed.

Holden, promoted from assistant principal at the school this year, said in a statement that he was enforcing long-standing school policy and would continue to do so. Lindsey did not immediately respond to messages seeking comment. Black’s stripped her hair back to its natural, dark blond color and was allowed back to school the next day, though some red splotches have remained, eliciting frequent questions from other students, Black said. “My red hair is a part of me and is how my friends recognize me,” she said. “I would really like to have my red hair back.” (Reuters)