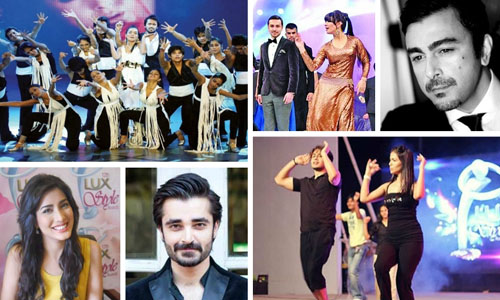 The Nominees for the 13th LUX Style Awards (LSA) 2014 were announced in Karachi this week. Top celebrities from Pakistan’s entertainment and fashion industries will be up for awards in 27 categories from the four disciplines of fashion, film, music and television.

Each category will be judged independently by four juries with expertise in each discipline.

The fashion jury decided on Nominations for 10 Fashion categories namely:

The greatest debate was on the fast blurring distinction between Prêt and High Street. The emergence of exciting retail space and steady dominance of Fashion Week has resulted in designers updating their high street lines. For the year 2013, the selection was made based on ease of availability across Pakistan, a fashion forward ethos to the collection and prominent showing at Fashion Weeks. The fashion jury decided to merge the two categories for the Awards next year (i.e for LSA 2015 when the work for calendar year 2014 will be under consideration) and to bring back the category of Best Bridal wear Designer.

Selection of winners for fashion categories will be decided in a second tier of voting based on portfolio submissions, by members of the fashion fraternity in Karachi and Lahore. On the fashion front, SanaSafinaz and Sania Maskatiya dominate the fashion market which is evident by their multiple nominations in the design categories for this year. It was also an exciting year for the film industry with several young directors coming up with box office hits. The awards in the film section will be jury based and not on box office takings. The music industry is slowly lurching back to its feet from the fallow years of 2011 and 2012.

Music award nominations for the year 2013 were hotly debated and a wide range of music was discussed. The internet and radio are the mediums that drive this category and the jury’s submissions in all five categories of Best Album, Best Video, Best Original Sound Track encompassing film and TV, Song of the Year and Emerging Talent will be put to public voting for winner selection. Music Video winner selection will remain a jury choice. Television nominations in eight categories were divided in Best Satellite (Play, Actor, and Actress) and Best Terrestrial (Play, Actor, and Actress). Winners of these categories are decided via Viewer’s Choice votes.

Best Writer and Best Director as combined (terrestrial and satellite) categories each are decided by the TV Jury. It is a reflection on the robustness of the TV industry, that the nominees in this section were evenly divided amongst all the top entertainment channels. The LUX Style Awards for excellence in Fashion Film, Music and Television will be held later this quarter and aired nationally on the ARY network.

Model of the Year (Female)

Model of the Year (Male)

Song of the Year