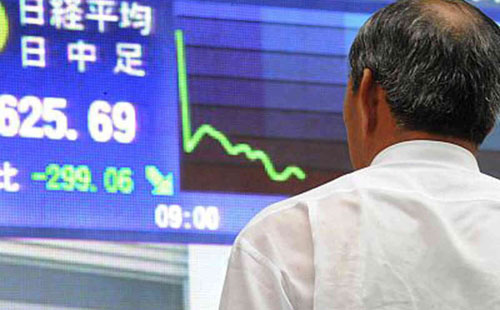 Focus turned to China, which is due to release second quarter GDP figures on Wednesday along with other data including industrial production and retail sales numbers. The data comes as recent concerns over economic prospects for China — a key driver of world growth — have eased owing to a pick-up in key indicators in the second quarter and government stimulus measures to boost the economy. But an AFP survey predicted that growth failed to accelerate in the three months to June, with the world’s second-largest economy forecast to record its worst annual performance in 24 years. China’s GDP expanded 7.4 percent on-year in that period — a result that would put it in line with the first quarter’s expansion — according to the median forecast in AFP’s survey of 17 economists.

Investors will also be looking out for US retail sales data and the minutes from the Reserve Bank of Australia’s policy meeting, which are both out on Tuesday. On Thursday, US housing starts data will be released. US stocks ended slightly up on Friday following a handful of mixed earnings reports in the coming week and as officials in Lisbon took steps to allay concerns over a possible banking crisis. Troubles at Portugal’s largest listed lender, Banco Espirito Santo, had raised fears of a possible default and a return to the dark days of the eurozone debt crisis.