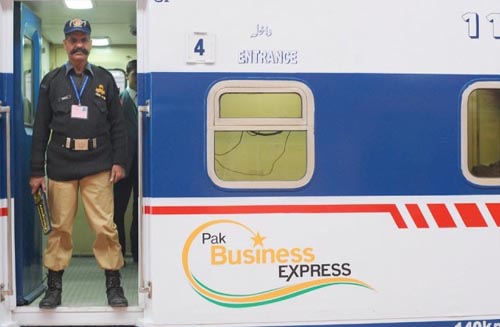 The first-ever joint venture of Pakistan Railways and Four Brothers Group, titled the “Pak Business Express”, is passing through its most difficult phase yet as officials on both sides seem least interested in continuing the project.

According to sources, the project is running only because both parties are still getting some benefits out of it. They already have decided to engage into a legal battle to get a head start in saving their initial investments. Currently, the case is at the National Accountability Bureau whereas the management of Business Express has taken a stay order to continue operations. However, Business Express, which was known for its punctuality, has been running behind schedule for months and is now losing its charm. The management says that the trains’ arrival time to Lahore is delayed by up to 12 hours.

Seemingly, the main issue for Pakistan Railways is that they did not accept the venture wholeheartedly since the very first day. The high seat occupancy rate of 88%, which fetches Rs3.1 million per day, set between both parties proved fatal for Business Express management as they were unable to pay their dues on time. This provided Railways with a reason to suspend their train operations in between and also raised concerns that the management was not interested in paying its outstanding dues of Rs400 million till the seat occupancy rate was revised down to 65%. “We believe the outstanding dues are Rs930 million. But the Economic Coordination Committee settled the matter at Rs390 million,” said Pakistan Railways Public Relations Director Rauf Tahir. “This deal was not fair. It was meant to facilitate the other party and Railways did not benefit at all.

On the other hand, the management at Business Express claims that it has nothing to pay to Railways but rather has to recover Rs110 million, an amount which was paid for the repair of coaches along with Rs220.5 million given for infrastructure and locomotive repairs. “Our efforts and hard work of two years is at stake, the mismanagement of Pakistan Railways is costing us a lot. Late departures and arrivals are now routine and this has dented our business. We have bookings worth only Rs1.2 million and this during the peak season,” said Mian Shafqat, director operations at Pak Business Express.

“We cannot operate in such circumstances. If Railways wants us to close then they should give us a notice and we will shut down operations immediately.” No matter how bleak the situation seems none of the parties have taken the step of issuing a notice. This is mainly because in doing so, the side, which serves the notice, foregoes the right to claim its initial investment, according to the contract.The writer is an economist and a Phd from Cambridge University. –tribune