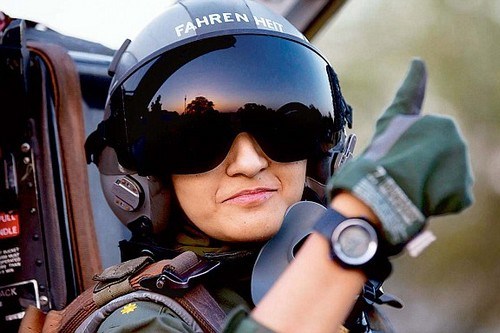 Women in the military have a history that extends over 400 years into the past, throughout a large number of cultures and nations. Women have played many roles in the military, from ancient warrior women, to the women currently serving in conflicts, even though the vast majority of all combatants have been men in every culture.

So here is a list of some attractive women soldiers from around the world. You will find that some of them are really hot. Well, from my point of view these girls have ability to won any beauty contest, but on the other hand these military girls seem absolutely ready to protect their respective countries. Just take a look at these military lovelies from armies around the globe and vote for the country with the cutest recruits. Share your views in comments!

Here are 10 Most Attractive Female Armed Forces in the World.

American women soldiers hold tenth place in our list of most attractive female armed forces in the world. Women have been a part of the war effort since the Revolutionary War, but in the early days, they had to cloak themselves in disguise to serve alongside men. Now they were given auxiliary roles. As of 2012, women make up 14% of the U.S. military. More than 165,000 women are enlisted and active in the armed services with over 35,000 additional women serving as officers.

For years, Czechoslovakian military regulations did not allow women in the military and it was after WWII that the enlistment of women into military service was permitted. Czech women fought during WWII with distinction as medical personnel, phone operators, and anti-aircraft gun crews. They served in the Czechoslovakian unit in the Soviet Union, in the British Women Auxiliary Air Forces in the United Kingdom and the British Army in the Middle East. Now, they have become an integral part of the Czech Armed Forces and some of their positions proved to be indispensable, especially those in the Air Force.

Poland army is at No.8 in our list. Currently, there are around 2,500 women in the Polish armed forces, and all women have the same rights as men to join and serve in the Polish Army, Navy, Air Force and Special Forces.

British women hold the 7th position among the most attractive soldiers. They have been integrated into the British Armed Forces since the early 1990s; however, they remain excluded from primarily combat units in the Army, Royal Marines, and Royal Air Force Regiment.

The female soldiers of Pakistan are 6th position in the list of most attractive female armed forces. Pakistan is the only country in the Islamic world where women are performing their military duties in the hostile and combat military operations. Women have been taking part in Pakistan military since 1947 after the establishment of Pakistan. Currently a strong sizable unit of women soldiers who are serving in the Pakistan Armed Forces.

In 2006, the first women fighter pilots batch joined the combat aerial mission command of PAF and women in Pakistan Army have been trained in combat missions, particularly in sniper, airborne and infantry warfare. The Pakistan Navy is currently the only uniform service branch where women are restricted to serve in the combat missions.

Israel is the only nation to conscript women and assign some of them to infantry combatant service which places them directly in the line of enemy fire. All Israelis are forced to carry out national service when they turn 18 – meaning the nation’s military is packed with female recruits. According to current figures as many as 31 per cent of IDF soldiers are women – three times more than the UK. But does that mean Israel has the world’s most attractive armed forces?

At No. 4 in our list are attractive soldiers from Greek army. Greece currently has universal compulsory military service for males, under which all men above 18 years of age serve for 9 months. Women may serve in the Greek military on a voluntary basis, they are not required to enlist, as men are.

Air Force established female branches in which women took on a range of support roles. Women were integrated into the services during the late 1970s and early 1980s and can now serve in most positions in the Australian Defence Force (ADF), including combat roles.

There is a popular opinion that Russia has most beautiful girls: slender, well-groomed, with just the right amount of that mysterious soul mixed in. Russian women, who have played an important role in their country’s military history, at 2nd position among the most attractive armed forces in the world. They performed various duties in the armies throughout Russian history, specially during the Great Patriotic War.

The Eastern European nation has topped our list of most attractive armed forces. To find the sexiest army recruits in the world, nothing but Romania. The Romanian army ability not be able to boast the firepower of the world’s top aggressive powers, but they accept one abstruse weapon that’s a apple beater – the Sexiest women.

Eurobond a Funding Source for Pakistan

Eurobond a Funding Source for Pakistan