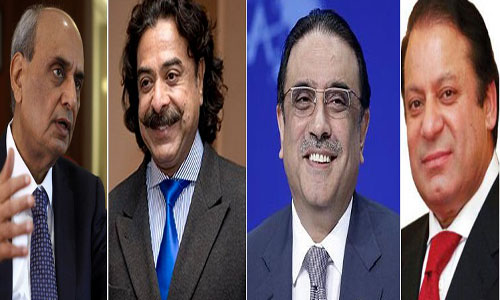 Pakistan is struggling with its poor economic situation for the past few years but it’s a matter of just state’s account, otherwise some individuals are in a position that they would be listed among ‘World’s richest people list’ sooner or later.

Here we are presenting the list of Top 10 Richest Pakistanis of 2014 with the details of net worth of the financial assets they posses. The presence of two politicians, the heads of two top political parties of Pakistan who ruled the country, may irk you but others made their way to this list with their valuable efforts.

One of the most leading person in the race of the money is none other than Shahid Khan . The Man who opened his eyes in Pakistan became the richest person of the country. He owns two sports teams one NFL (Jacksonville Jaguars), and the other one is from English Premier League Fulham FC. He hold’s dual nationality (United States, Pakistan) . Flex-N-Gate where he worked during his studies at University of Illinois after his Graduation he becomes engineering director for the company.

He is prominent Pakistani industrialist and entrepreneur and according to a survey he is the richest person of Pakistan , He live’s in United States and holder of some big industries and companies . He is CEO of Nishat Group, a very popular industry in Pakistan. He was born in Lahore to a wealthy Chinioti family. His Business Nishat Textiles segment, Nishat Textiles is Pakistan’s largest fabric mill, and he is expending it more.

Asif Ali Zardari is one of the finest leaders of Pakistan most popular Political Party “PPP” . He served as the 11th President of Pakistan from 2008 to 2013. He open his eyes in Karachi, Pakistan married to the daughter of Zulfiqar Ali Bhutto (Benazir Bhutto) . He is the only son of Hakim Ali Zardari, a tribal chief and prominent landowner, and Zarrin Zardari . According to some news Sources he is the 2nd Richest Pakistani person, there are many big corruption cases that haves been charged on him.

Nawaz Sharif he is the only Politician in the Pakistan who become most times Prime Minster ,  The 64 year old open his Eye’s in Lahore , Pakistan to the family Muhammad Sharif . He runs the Political party Pakistan Muslim League- Nawaz . But what make him rich person in Pakistan is his Food and Steel Industries. He is the leading business tycoon’s of Pakistan with most Investment in Pakistan and Outside of the Pakistan.

Sir Anwar Pervez is a businessman in the United Kingdom of Pakistani origin. He opens his eyes in Gujar Khan, British India before the creation of Pakistan. He is the Chairman Bestway group, holds two Nationalities (Pakistani, British) .  Industry where he invested is Cement, Banking, Cash & Carry (Wholesale).  He holds shares in the United Bank Limited. The 79 year old Business Tycoon received allots of awards for his achievements in Business. Order of the British Empire, EMMA Business Personality of the Year, Asian Businessman of the Year, and Siatra-e-Eisaar by the Government of Pakistan.

Saddaruddin Hashwani the Chairman Hashoo Group. He invested in the Business likes “Hotels & Resorts, Oil & Gas”. The 73 year old born in Karachi,Pakistan. The Hashoo Group of Companies has in its fold, as owners and operators, the Pearl Continental Hotels and Marriott Hotels brands. There are multiple awards he received for his services in World Tourism convention. He received gold medal for distinguished services for hospitality industry in Pakistan.

Nasir Schon , a richest Pakistani who is Born in Karachi , He invested in the Business of (Real estate, Fertilizer) . His residence is in Dubai, U.A.E. Dubai Lagoon real estate project $830 Million on which he is currently working. He is the CEO Schon Group, Schon Properties.

Abdul R Yaqoob died on 21 February 2014 in London, he is ill from a long period of time. He was born in Surat, British India. Abdul Razzak Yaqoob was appointed the head of the World Memon Organization. He is the man who brings the Ary Group. He is very much popular among the People of Pakistan due to his social work; people give a huge respect for his noble causes.

Malik Riaz the man who build the most successful house and real estate business of development like Bahria Town in Pakistan . He born in Sialkot, Pakistan , According to a news sources and survey assets Hussain’s net worth has been subject to several estimations put his assets value round about $2 Billion to $10 Billion , it brings him in the list of the most richest Pakistani. Malik Riaz has made significant contributions towards philanthropy and he is creating hospitals and houses. He is the father of four daughters and one son, Ali Riaz Awan (CEO, Bahria Tow). He is self made Business tycoons of Pakistan.

Saigol group is owned by the Family of ( The Saigol) and its one of the richest companies of Pakistan. The Saigol family and its companies are based in Lahore, Pakistan. Mr Tariq Saigol is the eldest brother in the family and head of the Kohinoor-Maple group, which own’s the Kohinoor textile mills and Maple-Leaf Cement. The investement of the Saigol groups in the different business related to “Energy, car production, Textiles”.