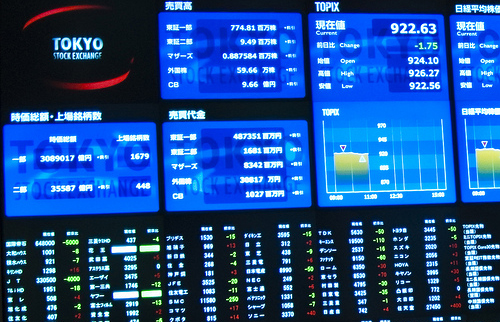 Tokyo shares opened higher Monday, lifted by a rally on Wall Street and a higher dollar. The headline Nikkei index at the Tokyo Stock Exchange rose 0.83 percent or 119.96 points to 14,582.13 in the first few minutes of trade.

The euro stood at $1.3627 and 138.98 yen, from $1.3632 and 138.91 in New York on Friday. “The broader signs point to a continuing Nikkei recovery,” said Monex chief strategist Takashi Hiroki. However, the index has faced strong selling pressure in the mid-14,500 area for the past six weeks, with Hiroki expecting the Nikkei to hover between 14,400 and 14,600 for now, according to Dow Jones Newswires. For the rest of the week, investors will be eyeing a barrage of major US data, including revised GDP figures and housing data. In Japan, players will see April industrial production, consumer price and household spending figures for the first time since consumption tax was raised from five to eight percent. -thenews