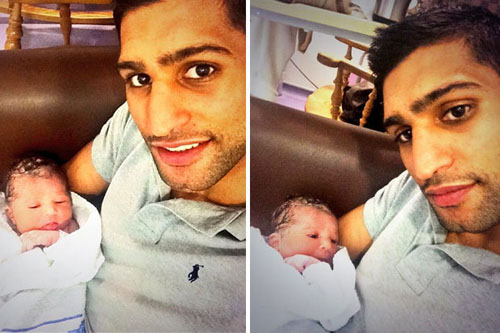 The British former two-time world champion lovingly cradled the tot, named Lamysa, after his wife Faryal gave birth yesterday at around 4am. Amir, 27, tweeted: “Faryal and I are delighted to announce the birth our first child Lamysa Khan everyone doing very well, thank you for all your wishes.”

In contrast to her dad’s brutal left hook in the boxing ring, the little girl’s name means ‘soft to the touch’ in Arabic. He let his knockout 22-year-old American-Pakistani wife pick their first-born child’s name after he insisted that she gives birth in his hometown of Bolton rather than the US.  A new baby would be a good reason to retire from boxing but Amir khan says that it has only made him want to work harder. He said: “I will have a family to look after so I will have to be much more smart. “I always said I would get out at 28, but I think I will be too young.

I’m getting better and I can see I’m getting more mature and stronger.” He added: “I think it will be 30 plus. The wife won’t be happy, but I can go on. Even the fights I’ve lost, they’ve been knock-outs, but I’ve hardly had any punishment. I’ve never been beaten up. “I will know when to stop when I am making mistakes, silly mistakes.” The young couple got married in June last year at the posh Waldorf-Astoria hotel in New York. But soon they flew back to the UK to throw another huge wedding bash with his British-Pakistani family and more than 4,000 guests. They got engaged in 2012 in a lavish £150,000 party at the Bolton Wanderers’ Reebok Stadium after they met in New York.