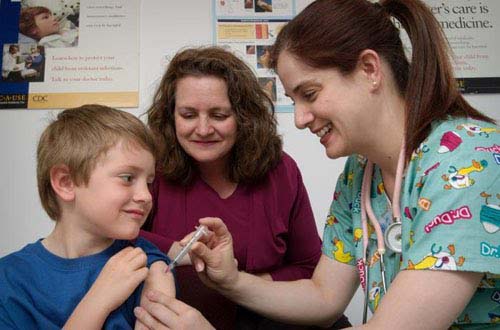 Provinces gear up to fight measles after 18 deaths

The measles outbreak in the country continues this year with 18 lives already lost to the fast spreading disease. Like last year, Sindh and Khyber-Pakhtunkhwa (K-P) reported the maximum number of positive cases while a significant drop in reported cases has been witnessed in Punjab as compared to last year.

To counter the spread of the vaccine-preventable disease, the federal and provincial governments have kicked off the largest ever vaccination drive in the history of Pakistan, with 13-day supplementary immunization activities (SIAs) in Sindh and K-P after a one-year delay. The total number of reported cases for the year cannot be determined, as the Expanded Programmer on Immunization (EPI) currently lacks updated data for the last six months.  According to the data, from January 2014 till March a total number of 196 positive cases of measles were reported along with 18 deaths. Majority of the cases (59) were reported from K-P, followed by Sindh (48) which saw 14 deaths.

AJK had 44 cases along with four deaths, while positive cases in Balochistan were 33, six in Punjab, four in Islamabad and two in Fata. Last year, a total number of 8,749 positive cases of measles were reported. An official at EPI on condition of anonymity said the current nationwide anti-measles drive was scheduled to be carried out last year but did not take place due to a scarcity of resources. “If the drive had been carried out last year, Pakistan would have been able to control this year’s outbreak,” said the official. The first phase of the drive has been launched in Sindh and K-P from May 19 – May 31.

Dr Qamarul Hassan of the World Health Organisation (WHO) said the reason behind the continuous outbreak of measles is the low coverage of routine immunization across the country. He said the existing cold chain system to store the measles vaccine at various areas of the country is a serious cause for concern. “The available equipment used to store vaccines is either out of order or not properly maintained.  This is because of poor management of the system,” he said. Dr Hassan advised that vaccinators should avoid injecting the measles vaccination in front of other children as it causes a sense of fear and may even lose consciousness if they see others vaccinated. -tribune