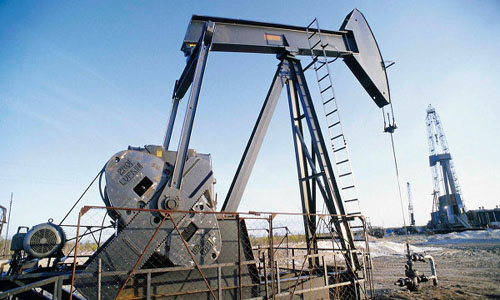 The US benchmark, West Texas Intermediate (WTI) for delivery in June, rose five cents to $102.07 in mid-morning trade, while Brent North Sea crude for July rose ten cents to $109.85. Armed groups attacked Libya´s interim parliament and an airbase in the east Sunday, adding to turmoil in the country where a colonel claiming to speak on behalf of the army declared that parliament had been suspended. “The situation in Libya is having a firm impact on sentiment,” Michael McCarthy, chief market strategist at CMC Markets in Sydney,

“There has been no impact on supply but it is a good reminder to investors of potential disruptions that exist not only in Ukraine but also in oil-producing countries like Libya,” he said,  Since the toppling of dictator Moamer Kadhafi in 2011, successive Libyan governments have struggled to impose order as heavily armed former rebel brigades carve out their own fiefdoms. The violence in Libya, a member of the OPEC cartel, comes just weeks after the resumption of oil exports following a nine-month blockade of sea terminals by rebels.

Its exports are expected to quadruple to one million barrels per day by mid-June, as slashed output is restored. McCarthy said oil prices also remain propped up by the Ukraine crisis, where rebels are attempting to break away from the former Soviet state and become a part of Russia. Ukraine is a major conduit for Russian oil and gas exports to Western Europe, and analysts fear that an escalation of the crisis could hit supplies and send prices soaring. -thenews

Up to Six Hours of Load Shedding as Shortage rises to 2,100MW