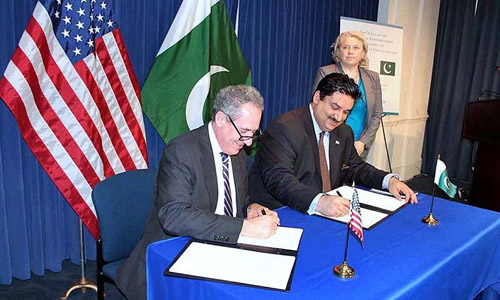 Pakistan and the United States announced an agreement on a Joint Action Plan to expand bilateral trade and investment flows over the next five years, as two countries vowed to strengthen their ties.

The accord came on Tuesday as Minister for Commerce Khurram Dastgir Khan and US Trade Representative Ambassador Michael Froman led the two sides at a meeting of the US-Pakistan Trade and Investment Framework Agreement (TIFA) Council. They also signed a Memorandum of Understanding on women’s economic empowerment at the meeting.

Welcoming the Pakistani delegation, Froman said, “Trade with Pakistan supports good-paying jobs in the US and is a key part of our effort to unlock opportunity for US works, businesses, farmers, and ranchers.” Dastgir hailed the Joint Action Plan, citing it as a fresh development in US-Pak trade and economic relations, Pakistan’s Ambassador to the US Jalil Abbas Jilani and senior US and Pakistani officials were also present. –pakistantoday