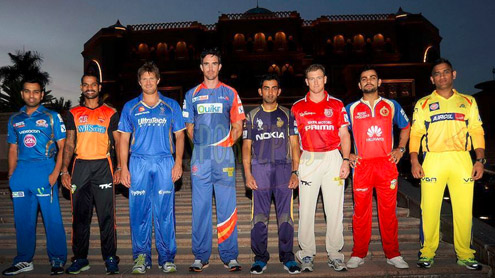 The seventh season of Pepsi Indian Premier League was flagged off in Abu Dhabi with an opening event rich in cricketing pedigree as well as a generous dose of fun and frolic.

It began with a welcome note by H.E. Sheikh Nahayan Mubarak Al Nahayan, Minister of Culture, Youth & Community Development, in which he spoke of the UAE’s determination as a nation to move forward in the sporting field. Then it was time for host, Ravi Shastri to invite the eight IPL captains to vow their allegiance to maintain the integrity of cricket by signing the MCC Spirit of Cricket plaque.

Staying with the subject of cricket’s pride, Sunil Gavaskar, interim President, BCCI-IPL, delivered a passionate speech about how he and his colleagues at the BCCI intend to take every possible measure to eradicate the very shadow of corruption from the sport. Mr. Gavaskar appealed cricket fans all over the world to maintain their faith in cricket and believe in its sanctity. After the serious business, it was time for some entertainment.

There was a light and sound show which depicted traditions and cultures of the UAE and India and merged them together to bring out a seamless bond between the two nations. Then it was the time for some Bollywood style masti as the gorgeous Indian actress, Deepika Padukone sizzled the stage with a sassy number that mesmerized the audience. The last but by no means the least individual to take the stage was Shah Rukh Khan.

The popular actor and the co-owner of the Kolkata Knight Riders had the audience in splits with a sense of humour appealing the masses. He invited cricketers on the stage – Shane Watson played the guitar and sang a song, Virat Kohli had banter with Khan and MS Dhoni regaled his fans with his boyish charm. The glorious evening came to a glorious end with the most brilliant and beautiful fireworks that brightened the moods of the beholders and declared Pepsi IPL 2014 open brightly.