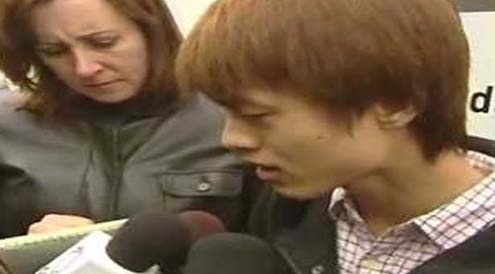 A jury on Monday convicted of first-degree murder a Canadian man accused of attacking a Chinese student in her Toronto apartment as her boyfriend watched via webcam in China.

Brian Dickson, 32, had offered to plead guilty to manslaughter, but the prosecution rejected the lesser charge in the death of Qian Liu. Justice Anne Molloy imposed a life sentence with no chance of parole for 25 years.Liu was found dead in April 2011, just a few hours after her boyfriend in China watched via webcam as she tried to fend off an attacker who appeared at her door. The boyfriend told police he saw Liu struggling with a man before her computer was shut off.

The case received international attention. Robert Nuttall, Dickson´s lawyer, said his client has been “absolutely remorseful for a very long time.” “He didn´t say anything. He just accepted the verdict,” Nuttall said.The prosecution presented the theory that Dickson forced himself on Liu then killed her by asphyxiation to cover it up. Liu, who was 23, had moved to Canada to study English.

Dickson lived in an apartment in the same house as Liu, just outside the campus of York University. Police said Liu´s laptop computer, webcam and mobile phone were taken from the apartment the night of the attack. Police said the online chat was on a live streaming camera and was not recorded.Liu´s father wiped away tears as the verdict was read. -Thenews