Hafeez not worried about Saqlain’s magic 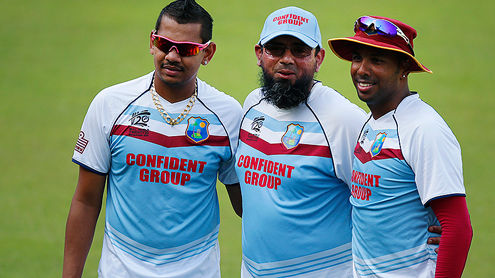 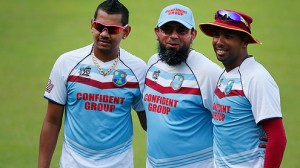 The West Indies have an ace up their sleeve in Saqlain Mushtaq as the defending champions take on Pakistan in a make-or-break World Twenty20 encounter in Dhaka on Tuesday. The winner of the night clash at the Sher-e-Bangla stadium will join India in the semi-finals from group two of the Super-10s, condemning the loser to an early flight home. Saqlain, the former Pakistan off-spinner, is a key member on the West Indies bench as their spin bowling consultant for the tournament, and his advice has benefited the team immensely.

The West Indies, better known for its battery of fast bowlers, now boast of two of the finest spinners in Twenty20 cricket in Samuel Badree, who opens with the new ball, and Sunil Narine. Saqlain, the original master of the “doosra” — the off-spinner’s version of the googly — has also proved a calming influence on the usually cavalier Windies batsmen, giving them tips on how to play the turning ball. West Indies captain Darren Sammy said Saqlain’s serene presence and knowledge had proved a huge boost for his team, which will face a four-pronged Pakistan spin attack led by the prolific Saeed Ajmal.

“Saqlain has a lot of experience on the slow wickets that one gets in Bangladesh,” he said. “He’s very calm guy who knows a lot about the game. He has been a good addition to our coaching staff.” Pakistan captain Mohammad Hafeez said Saqlain was entitled to work with other teams — just like compatriot Mushtaq Ahmed was doing with England — but that did not worry his team. “He was a world-class spinner,” Hafeez said of Saqlain, who retired 10 years ago with 208 Test and 288 one-day wickets. “But he does not have a magic formula, nor can he come and bowl himself. “We believe in ourselves and I think our players are good enough to win the match,” Hafeez told AFP.

The 37-year-old Saqlain said he was delighted to work with the West Indies, but declined to predict the winner of Tuesday’s match. “It’s a great opportunity and honour to be associated with such a great team like the West Indies,” Saqlain told reporters on Monday. “I don’t want to pick a winner, but the team which has better self-belief will win. My wishes are obviously with my team, which is the West Indies at the moment.” Saqlain said it was a matter of pride that spinners were performing so well in Twenty20 cricket.

“In Badree and Narine, the West Indies have two very good spinners,” he said. “Every team has a good spinner now. I really feel happy for them.” Both Pakistan and the West Indies blossomed late in the tournament after losing their opening games to India, who sailed through to the semi-finals as the only unbeaten team in the Super-10s. Pakistan, the 2009 champions who made the semi-finals in all four previous editions, revived their fortunes with a 16-run win over Australia before thumping hosts Bangladesh by 50 runs. The West Indies thrashed Bangladesh by 73 runs before a spectacular late assault by Sammy handed them a last-over win over Australia. -Dawn