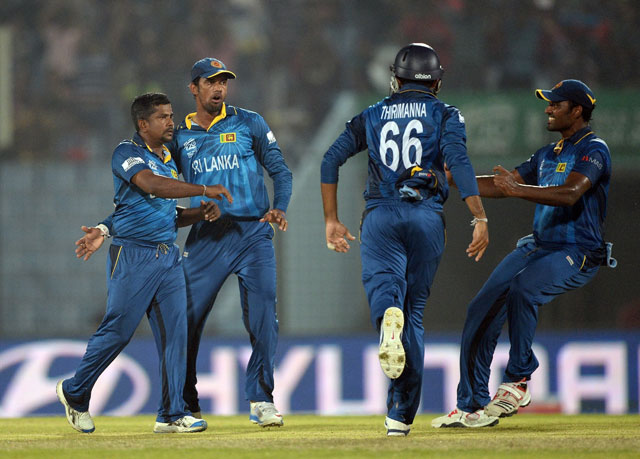 In the ICC World T20 2014 Group 1 game played between New Zealand and Sri Lanka at Chittagong, New Zealand simply crumbled under pressure to the wily old fox, Rangana Herath.He presented an upright to straighten the ball a wee bit down the line to leave New Zealand in doldrums after the completion of 15 overs.. It was a disastrous batting performance from New Zealand and they eventually lost the game by 59 runs. It has meant that Sri Lanka have reached the semi-final stage of the tournament with New Zealand packing their bags and going back home. 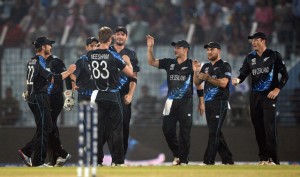 Earlier, New Zealand’s swing bowlers twinned late swing with hit the deck bowling to leave Sri Lanka in some trouble. Finally, Sri Lanka could only make 119 in their allotted 20 overs. Even the experienced campaigner, Mahela Jayawardene struggled for precise metre of timing on a slow deck and against a professional unit. He finally lost the plot and got out to the off-spinner, Nathan McCullum. Overall a disappointing show put up by Sri Lanka in what is a crucial encounter for both sides. In fact, it required a few lusty blows from Thisara Perera to at least help them reach a decent total.

He too lost his wicket to a slower one that was well-disguised by Kyle Mills, the seam/swing bowler. Sri Lanka started their innings with the dangerous Kusal Perera and Tillakaratne Dilshan opening the batting. It was Perera who opened up his shoulders first by neatly playing a flick shot with needlepoint precision to bisect the gap, as the ball raced to the boundary boards. He followed it up with a Jayasuriyaesque six over the mid-wicket region. For New Zealand, on expected lines, Mills swung the ball a wee bit in the air away from the left-hander and into the right-hander in his first over, but wasn’t effective enough in slightly difficult conditions. 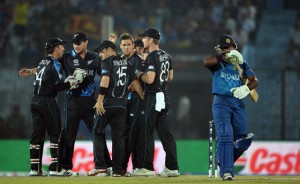 The wet ball didn’t help the left-arm swing bowler, Trent Boult either during the first over he bowled. He bowled a beamer in his first over too. New Zealand though, got a bit lucky with Perera being strangled down the leg-side of the bowling off Boult. On the other end of the spectrum, Dilshan continued on his merry way with a Dilscoop off Mills, before he lost his wicket to Boult, while trying to play the scoop shot. Once Boult settled into his rhythm, he got it to swing it late and take three wickets.

Mitchell McClenaghan and Corey Anderson also swung the ball a bit in the air and did hit the deck hard. It needed Mahela Jayawardene’s mastery to handle some fine swing bowling between the fifth and the 10th over of the game. New Zealand though, continued to make dent into the opposition ranks by dismissing Lahiru Thirimanne for a well-measured innings of 20 off 18 balls. It left Sri Lanka in a spot of bother during the middle overs of the game. Even James Neesham got the ball to swing it late.

New Zealand won the toss and elected to bowl.