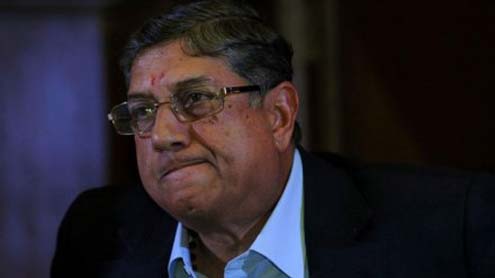 India’s Supreme Court Tuesday urged the powerful head of the country’s cricket board to resign so investigators can fully probe illegal betting allegations, calling his refusal to quit so far ‘nauseating’. A two-judge panel warned it could order N. Srinivasan, regarded as the most powerful man in world cricket, to stand down unless he went voluntarily as his presence was hampering the investigation, which involves his son-in-law. “Unless the Board of Control for Cricket in India (BCCI) president stands down, there can be no fair investigation. It’s nauseating,” Justice A K Patnaik told the court in New Delhi. “Why is Srinivasan sticking to his chair? If you don’t step down, then we will pass an order.”

The bench is looking at a damning report that it commissioned last year into wrongdoing in the Indian Premier League (IPL) following a betting and spot-fixing scandal that rocked the Twenty20 tournament. The report, released in February, concluded that Srinivasan’s son-in-law Gurunath Meiyappan could be guilty of illegal betting on IPL games, in a major blow to Srinivasan who is due to take over as head of the International Cricket Council (ICC) in July. India is also the most powerful country in world cricket due to its vast television audience, which enables the board to generate almost 70 percent of the game’s revenues. Meiyappan was the team principal of Chennai Super Kings, an IPL franchise owned by Srinivasan’s India Cements Company and captained by national skipper Mahendra Singh Dhoni.

The report, by a panel headed by retired judge Mukul Mudgal, suggested Meiyappan may have passed on team information to outsiders for illegal betting, but did not specify what information or to whom. ‘Very serious allegations’: “There are no definite findings by the Mudgal committee but the allegations are of a very serious nature,” Patnaik told the court. “Whether the BCCI will act on the findings of the probe panel is a big, big question.” The judge asked the BCCI’s lawyers to go away and read a sealed section of the report, which has not been made public, and return on Thursday when the case will continue. There was no immediate reaction from Srinivasan, although he was quoted as saying by the NDTV network that he would “study” the court order.

However in a sign that he could face an internal challenge if he tries to cling to power, BCCI vice president Shivlal Yadav said the board should respect the views of the court. “It has to be carried out in total and BCCI will have to follow whatever the Apex Court has given,” he told the Press Trust of India news agency. Asked if he was willing to take over, he replied: “Absolutely, I am ready to accept any responsibility given to me.” An ICC spokesman said the world governing body “has no comment to offer at this stage” over what he called “an internal matter of the BCCI”.

Although many of India’s most famous cricketers are seen as reluctant to criticise the board for fear of jeopardising lucrative TV commentating work, former spin bowler Bishan Bedi praised the court for giving Srinivasan a ‘nudge’. “BCCI touches lowest low,” he said on Twitter, adding that Mudgal’s inquiry would allow India to “clean up corrupted cricket culture”. Srinivasan, who has not himself been accused of any wrongdoing, stepped aside temporarily as BCCI president in June last year when Meiyappan was first named in connection with the scandal. But after effectively resuming day-to-day control of the board, he won elections for a third term in September.

Meiyappan and others have also been the target of a separate police investigation which has resulted in charges including forgery, cheating and criminal conspiracy. The IPL has been hit by several scandals in recent years, including allegations of spot-fixing during last year’s tournament. Test fast bowler Shanthakumaran Sreesanth was subsequently banned from cricket for life after being found guilty of deliberately bowling badly in return for thousands of dollars from bookmakers. International news organisations, including AFP, have suspended their on-field coverage of matches hosted by the BCCI since 2012 after the board imposed restrictions on picture agencies.  -Dailytimes