Malaysia Airlines: Search back on for MH370 Wreckage 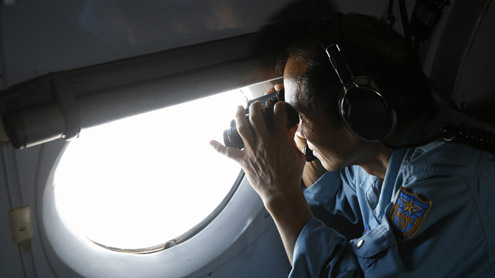 The search for wreckage of crashed Flight MH370 resumed Wednesday after the weather improved, with Chinese ships and Korean planes joining the hunt over a vast stretch of the Indian Ocean. Gale force winds, rain and big waves prevented any sorties being flown on Tuesday but 12 aircraft will be in the air Wednesday while Australia’s HMAS Success plans to conduct a surface sweep of an area where two objects were spotted this week. China’s polar supply ship Xue Long was also due in the area, with other Chinese vessels on their way, as the search intensifies for the Malaysian Airlines jet that crashed into the sea after vanishing on March 8 with 239 passengers on board.

“Today’s search is split into three areas within the same proximity covering a cumulative 80,000 square kilometers,” said the Australian Maritime Safety Authority, which is coordinating the search. “AMSA has tasked a total of 12 aircraft today to search for possible objects in the search area.” Seven of them are military planes and five civilian. Australian Prime Minister Tony Abbott said the search would continue until there was no hope of finding anything.

“We are just going to keep on looking because we owe it to people to do everything we can to resolve this riddle,” he told the Nine Network. “It is not absolutely open-ended but it is not something we will lightly abandon.” Six countries are now assisting in the operation — Australia, New Zealand, the United States, Japan, China and South Korea — to help bring some closure to relatives with definitive physical proof of the plane’s destruction. The US Navy has also sent a specialised device to help find the “black box” of flight and cockpit voice data, along with a robotic underwater vehicle that can scan the ocean’s depths.

Before the weather halted operations on Tuesday hopes had been high that wreckage would be found after two new objects — a green circular item and an orange rectangular one — were spotted on Monday by an Australian military plane. This followed larger “white and square” objects seen by a Chinese Ilyushin IL-76 reconnaissance plane, which came after satellite images and data captured by Australia, China and France showed indistinct items in the southern Indian Ocean Mark Bin skin, vice chief of Australia’s De fence Force, underscored the daunting size of the area under scrutiny by air crews flying exhausting sorties out of Perth. “We’re not trying to find a needle in a haystack, we’re still trying to define where the haystack is,” he told reporters on Tuesday. -Thenews