A new Wave of Terror in afghanistan! Will Karzi again Accused Pakistan ?? 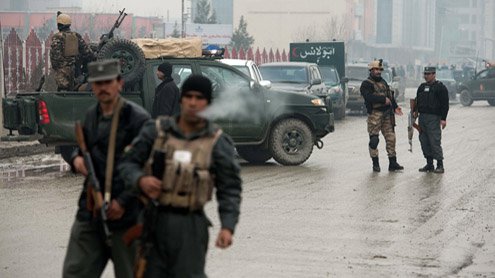 Multiple suicide attackers stormed a police station in the centre of the eastern Afghan city of Jalalabad on Thursday, killing at least three people in a major assault two weeks before the presidential election.There was no immediate claim of responsibility for the continuing attack, but Taliban militants have vowed a campaign of violence to disrupt the vote on April 5 to choose a successor to President Hamid Karzai. The target of the assault was a police station close to the governor’s house in Jalalabad, which has been the scene of repeated militant attacks in recent years.

“The attack was started by a car bombing,” Abdul Zia Ahmadzai, spokesman for the governor of Nangarhar province, of which Jalalabad is the capital, told. Sediq Sediqqi, spokesman for the interior ministry, said that five militants had been killed and one or two remained holed up inside the police station. “Two policemen have been killed, and one civilian,” he told AFP. “About 14 policemen also wounded.“The remaining terrorists are hiding in a tiny room, so the police are being careful now and going slowly after them so that are no more big losses.”  Dawn

Another Superhit release by Nike-air-Foamposite-Pro-Yeezy

Another Superhit release by Nike-air-Foamposite-Pro-Yeezy