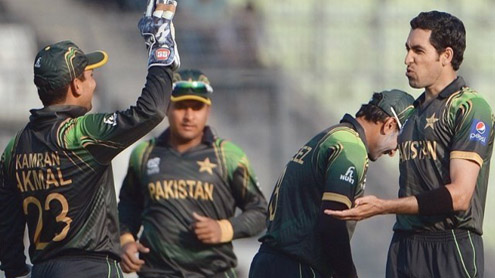 Pakistan warmed up for the World Twenty20 in the best possible fashion, recording a comfortable six-wicket win over New Zealand at the Sher-e-Bangla Stadium in Mirpur. Winning the toss and batting first, New Zealand had a mixed start as they put up 45 for the loss of two wickets in the powerplay. Mohammad Talha, who had a torrid time on the same pitches during the recently concluded Asia Cup, put in a much-improved performance this time around and accounted for openers Kane Williamson and Martin Guptill.

The Kiwi resistance was all about captain Brendon McCullum, who smashed 59 off 45 balls with three four and four massive sixes. McCullum found little support from the rest of his batting line as Umar Gul hit the stumps on three occasions to record figures of 4-16-3, restricting New Zealand to 145/9. In response, Pakistan started off extremely positively, Kamran Akmal and Sharjeel Khan smashing 36 off the first four overs.

Kamran continued even as Sharjeel fell shortly after, and retired on 52 in his comeback match in Pakistan colours. The incoming batsman, skipper Mohammad Hafeez, kept the foot on the gas, smashing five sixes and three fours in his knock off 55 off 39 balls to guide Pakistan home to a comfortable win.  Dwan.

Pakistan beats New Zealand by 6 wickets in WT20… by thetimesofpakistan