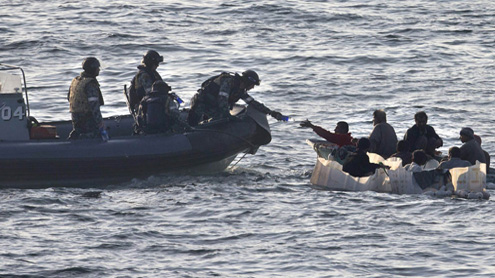 An Australian warship has rescued 13 Iranians shipwrecked off Pakistan on its way to the Middle East to join an international force conducting counter-terrorist and anti-piracy operations, officials said Wednesday. HMAS Darwin came across the men, some elderly, on Saturday in calm seas after their boat was reportedly struck by an unknown vessel and sank. They claimed to have been adrift for five days in international waters.

Images showed six of them crowded into a small blue dingy while three were perched on debris and the other four sitting inside large plastic containers that would have been swamped in rough conditions. “HMAS Darwin launched a rigid hull inflatable boat, provided food, water, minor medical care and safety to the shipwrecked men,” Australia’s department of defence said, with pictures showing the Australian forces were armed. It was not clear if they were taken aboard the Darwin, with defence officials saying only that the ship stayed with the fishermen until a Pakistani vessel, MSS Nusrat, arrived and took them to shore.

HMAS Darwin was in the area as part of a US-led international maritime force, known as the Combined Maritime Forces. “It was a good demonstration of coalition inter-operability,” Australian Major General Craig Orme said of the joint rescue with Pakistan authorities. It was not clear how many people were on the fishing boat when it sank.   Dwan