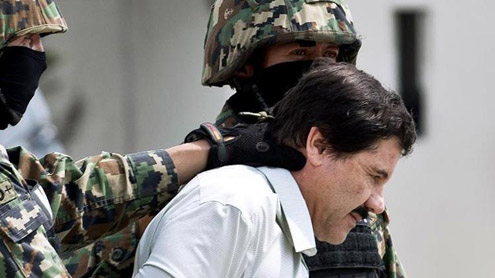 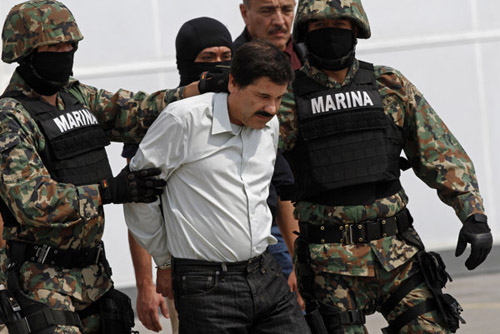 US authorities announced Sunday they will seek the extradition of Mexico´s most powerful drug lord as new details of his American-backed capture emerged, including the use of a drone and cellphone intercepts. The US drone was used for two weeks between mid-January and mid-February during a massive hunt for Sinaloa cartel boss Joaquin “El Chapo” Guzman in the northwestern city of Culiacan, a US government official told on condition of anonymity.

Guzman eventually slipped out of Culiacan, the capital of Sinaloa state, escaping through tunnels under one of his safe houses as Mexican marines closed in on him, Mexican and US officials said. Under pressure, the 56-year-old drug capo, who had been on the run since escaping from prison 13 years ago, fled further south to the beach resort city of Mazatlan.It was there that the elite marine unit captured him on Saturday, in the fourth floor of a condominium, with a surprisingly small entourage that included one lookout, one bodyguard and a woman believed to be his beauty-queen wife, the US official said.

“Cellular telephone intercepts were involved in the arrest,” the official said, stressing that no drone was used in Mazatlan. The official said the remote-controlled aircraft was used in Culiacan to corroborate other intelligence and that Mexico´s military had authorized its use. Despite being Mexico´s most wanted man, Guzman had been spending most of his time in Culiacan, living in a network of safe houses with escape tunnels, extra thick walls and steel-reinforced doors, officials said. “It´s a big city where he has his contacts, his women, his houses,” the US official said.

Officials had hoped that Guzman would flee to a rural, more open space to capture him, and his decision to run to Mazatlan around three days before his arrest was a surprise, the official said. His arrest capped a months-long operation that resulted in the arrests of a dozen Sinaloa cartel operatives, including alleged bodyguards of Guzman´s top associate, Ismael “El Mayo” Zambada. A Mexican official said authorities are still searching for Zambada, who is seen as Guzman´s natural successor.

Dollar rallies in Asia on upbeat US data