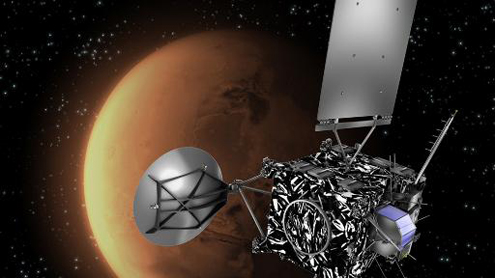 The European probe Rosetta woke up on Monday after a 31-month hibernation in a nearly decade-old quest to explore a comet, the European Space Agency (ESA) announced.“Hello, world!” ESA said on Twitter, mimicking the signal sent back from deep space by the billion-dollar unmanned craft.The agency described Rosetta as a “sleeping beauty” that had emerged from a long sleep. “It was a fairy-tale ending to a tense chapter,” it said. Europe’s most ambitious space mission, the craft was launched in 2004 on a trek of seven billion kilometres around the inner Solar System.

Its goal is to meet up in August with a comet, 67P/Churyumov-Gerasimenko, and in November send down a lander to carry out experiments on the icy wanderer. Comets are clusters of ice and dust, which are believed to be remnants from the very birth of our star system. Analysing this primeval stuff should unlock secrets of how the Solar System formed – and possibly how life on Earth was kickstarted.

Rosetta was placed in hibernation in June 2011 as it was so far from the Sun that light was too dim to power its solar array. Scientists on Monday had to wait more than eight hours before getting the precious signal, sent home from a distance of more than 800 million km, to confirm that it had woken up.

Nerves were strained at mission control in Darmstadt, Germany, until the all-is-well message showed up as a spike in a radio wave, prompting cheers and backslapping. “This was one alarm clock not to hit snooze on, and after a tense day we are absolutely delighted to have our spacecraft awake and back online,” said ESA’s Rosetta mission manager Fred Jansen.

After further health tests, Rosetta will progressively carry out braking and steering manoeuvres designed to get it on track with Comet “C-G”. In August, the craft will be inserted into an orbit just 25 kilometres above the comet, using 11 cameras, radar, microwave, infrared and other sensors to scan its surface. The craft carries a 100-kilo fridge-sized robot laboratory, Philae, designed to harpoon itself to the “dirty snowball” surface and carry out experiments, riding piggyback as the comet loops around the Sun.

The comet will be at its closest to the Sun on August 13, 2015, at about 185 million kms.  Over the last quarter-century, 11 unmanned spacecraft have been sent on missions to comets, most of them flybys. Successes include the US Stardust probe, which brought home dusty grains snatched from a comet’s wake and Europe’s Giotto, which ventured to within 200km of a comet’s surface.

But if Rosetta succeeds, it would outshine them all in terms of its sampling size, proximity and duration. “All other comet missions have been flybys, capturing fleeting moments in the life of these icy treasure chests,” said project scientist Matt Taylor.dailytimes