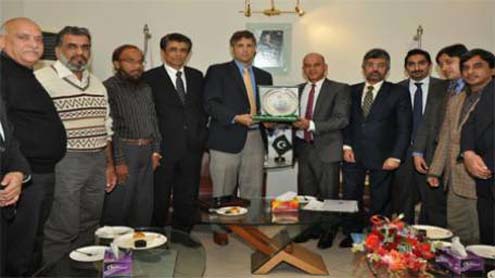 KARACHI: Economic Officer of US Consulate General in Karachi, Richard Bakewell and President of the Karachi Chamber of Commerce and Industry (KCCI), Abdullah Zaki have stressed the need to have closer relations between Pakistan and India, which would certainly encourage peace in the entire region.

Talking to the KCCI office bearers and Managing Committee members during his visit to KCCI, Richard Bakewell added that United States wants to see stable Pakistan and India.
President Abdullah Zaki stressed the need to effectively deal with Non-Tariff Barriers, which remain major hurdle in promoting trade between Pakistan and India.

Commenting on granting Most Favored Nation (MFN) status to India, President KCCI opined that high trade deficit with India was the main reason, which probably refrains Pakistan to give MFN status to India.

The reasons for this high deficit is the reluctance on Indian side to freely allow exporters of Pakistan to reach out to the Indian Markets along with several tariff and non-tariff barriers and other operational inefficiencies, he explained, adding that there exists a biased attitude towards Pakistan whereas the trust deficit, restrictive visa policy and difficulties in custom clearance are causing immense hardships for Pakistani exporters who are unable to reap the trade potential.

Referring to tension at the Line of Control between Pakistan and India, Abdullah pointed out that it creates problems for the business community as it has been observed that in such circumstances, the LCs of 90 days’ time period are changed to LC on sight while in some cases, the trade deal is even canceled.

He urged the Pakistani businessmen, who are successfully doing business with their Indian counterparts, to set a fine example for others to emulate by enhancing trade with India and sharing their experiences with their peers.

President KCCI said that the chamber is keen to enhance trade with India and favors granting MFN status to India, which would certainly make this region the hub of trading activities and gateway to South Asia. In this regard, KCCI has taken a number of initiatives to enhance trade between the two countries.

He also advocated opening of Monabao-Khokhrapar border for trade in order to further encourage trade between the two countries. “In this regard, setting up of warehouses and cold storage houses on both sides of the border can certainly facilitate trade of various goods, particularly the perishable items.”

Touching upon the overall functioning of KCCI, Abdullah informed the US Economic Officer that Karachi Chamber is the leading chamber of Pakistan with a strong membership base of more than 19,000 businessperson who are KCCI’s direct members whereas the more than 50,000 indirect members are also linked with the chamber through seven KCCI-affiliated trade bodies of Karachi city.