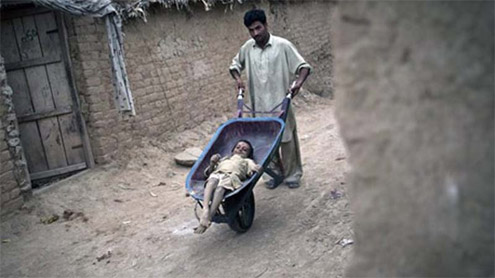 LAHORE: The polio eradication partners see Punjab as their biggest challenge instead of even Khyber Pakhtunkhwa.

The government, World Health Organisation (WHO) and Unicef are partners in efforts aimed at polio eradication in Pakistan. The WHO supports the government in operational and financial areas, whereas Unicef provides communication support.

Although the province has achieved many breakthroughs, a glance at last year’s indicators projects immense challenges ahead.

With more than 250,000 children not reached in Fata in 2013 because of a ban on police vaccination by Taliban in North and South Waziristan, the epidemic is set to explode in coming days, says a report sent to the government by the two other partners.

“Missed and NA (not available) children pose biggest challenge to Punjab as it tops the list of missed and NA children with the number reaching 134,877 in the campaign of September 2013, thus posing a formidable challenge to the polio eradication partners”, the report says.

Punjab is distantly followed by Khyber Pakhtunkhwa (116,998) and Sindh (72,330), it says. Polio eradication partners attribute the problem of missed and NA children to a number of issues, including laidback approach on the part of community towards vaccination, unavailability of teams or refusal to accept Oral Polio Vaccine (OPV).

According to data, in Punjab, out of a sample of 340 missed children, 205 account for non-availability of child during the National Immunisation Days (NID). As many as 112 children were not vaccinated due to non-availability of vaccination teams. Out of this sample, only nine turned out to be refusal cases, accounting for three per cent of the total number.

Punjab has less proportion of refusals as compared to other provinces. Out of over 3,000 refusals reported in Punjab, over 2,000 (69 per cent) were converted (covered). Wastage of vaccine, which costs Pakistan millions of dollars every year, has been of utmost concern for the partners.

Punjab has lowest percentage of vaccine wastage as compared to other provinces. The wastage rate recorded in the province stands at seven per cent in Sept NID. However, being the biggest province, Punjab accounts for maximum vaccine doses which stand at over 18.7 million. Over 17.4m children were vaccinated with the available OPV doses. Therefore the province’s share in vaccine wastage is much higher than other provinces.

Sindh closely followed with over eight per cent wastage by polio teams. With over 8.5m OPV doses, more than 7.8m children were vaccinated in the province. Rate of wastage stood at 10 per cent in KP and Balochistan.

In 2013, Khyber Pakhtunkhwa reported most number of refusals to polio vaccination, indicating a huge and persistent challenge. Threats to polio workers and police escorts are a daunting challenge. Since July 2012, 31 people have been killed in attacks on health workers in the country.

KP recorded over 53,000 refusals in Sept NID. Over 30 per cent of them were covered but still a huge number of families are opposed to vaccination. The province is followed by Sindh with over 18,000 refusals and Balochistan with 8,000. In Karachi alone, over 16,000 refusals have been reported.

Out of a sample of 340 missed children, 126 accounted for non-availability of teams in Fata mainly due to security reasons. Fata and KP account for 83 per cent of total polio cases reported in Pakistan. North Waziristan Agency alone has reported 27 polio cases indicating very intense viral circulation in the tribal agency.-Dawn

Bowlers Give Sri Lanka Edge Over Pakistan in Second Test

Bowlers Give Sri Lanka Edge Over Pakistan in Second Test