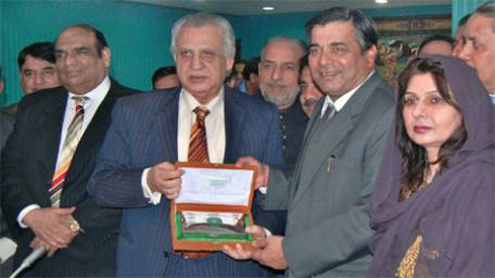 LAHORE: Indian High Commissioner Dr TC A Raghavan said candid and frank discussion was required on all issues of bilateral trade with Pakistan and for this purpose a new mechanism should be put in place.

Dr Raghavan said, “Most of the non-tariff barriers cited by Pakistani businessmen were related to inadequate infrastructure. Red tape was also an issue in this regard, which is being addressed by the Indian government.”

The Indian high commissioner was speaking at the Lahore Chamber of Commerce and Industry (LCCI) on Monday where both sides agreed to evolve a new mechanism for regular interaction on monthly basis to promote and address bilateral trade issues.

Dr Raghavan said total trade turnover between Pakistan and India has improved substantially to $2.5 billion as compared to the past and this year, it is expected that Pakistan will be able to enhance its exports to India to $500 million for the very first time. The Indian high commissioner further stressed the need for normal trading activity between the two countries, which is essential. In this regard, all issues between the two countries need to be addressed.

Regarding balance of trade, Dr Raghavan pointed out that this depends on the requirement of goods and services in each country. He pointed out that Indian trade with China was almost zero 15 years back however soon it has crossed $100 billion. However, India runs a trade deficit of $40 billion with China, because Indian import from China is more as compared to their exports to China. Still, he said, they were happy because the high quality machines that India imported from China at half the global rates was promoting Indian economy in a big way.

Commenting on trade ties between the business communities of the two countries, Raghavan said that the LCCI’s role in strengthening trade relations between the business communities of both nations will always be the major factor of overall progress in trade ties between Pakistan and India.
Efforts must be made by the governments of India and Pakistan to effectively deal with the visa issues, which can only be resolved by working jointly, he added.

In his welcome address LCCI President Engineer Sohail Lashari said that normalisation of trade links with India is on the top of the agenda of the government therefore it is very important to have direct and regular liaison with each other. The LCCI and the High Commission can make an effective mean of communication for the two governments and public with a view to put in place a strong argument for greater regional trade.

Referring to the trade data of last three years, the LCCI president said that it was a matter of concern that both sides could not succeed to bring any major increase in total trade between Pakistan and India. It indicates that either the efforts to enhance bilateral trade are not enough to produce results or there was a need to innovate the existing ways of business deals.

The LCCI president also sought the high commissioner cooperation to address the issues of unnecessary non-tariff barriers. He said that the current scenario, which requires compliance to various standards and provision of NOCs at every next step towards final destination of consignments, is simply time-consuming and discouraging to freer trade.

All that involve lengthy procedures which do not match with the desired pace of businessmen interested to expand the two-way trade volumes, he added.

Trade via third destination like Dubai, Singapore and others ranges around over $3 billion per annum has found some ways to avoid these challenges but this only adds to cost and time factors. If trade between Pakistan and India is liberalised the volume of exports of these commodities to India can take a quantum jump.

He said that the Pakistan’s business community was committed to have a serious, sustainable and constructive engagement with India and early and full normalization of relations on the basis of mutual non-interference, peaceful co-existence and respect for each other.

He said that the LCCI has achieved another milestone by establishing a Mediation Centre in collaboration with International Finance Corporation. We have well trained experts who can provide mediation services in order to settle any trade dispute. This centre will serve as a confidence booster for Indian business community to positively consider Pakistan for trade expansion.-dailytimes