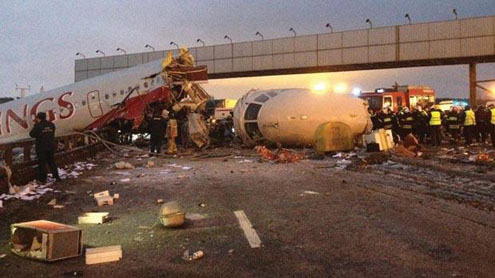 A Boeing 737 belonging to a domestic Russian airline crashed Sunday while attempting to land at an airport in western Tatarstan, killing all 50 people on board, Russia’s emergency situations ministry said.

“According to preliminary information, all the people on board the flight, 44 passengers and six crew members, were killed,” a ministry spokeswoman told AFP. “There were no children among the passengers,” she added. The local branch of the ministry said in an earlier statement that 44 people had died when the jet, arriving from Moscow’s Domodedovo airport, crashed on landing in the city of Kazan at 7:25 pm (1525 GMT). The Tatarstan Airlines plane “hit the runway and burst into flames”, Russia’s Investigative Committee said in a statement.

The news agency ITAR-TASS said the plane then “exploded”, quoting a local police source. Local news agencies reported the plane had tried to land three times before crashing. “According to preliminary information all 50 bodies of the victims were found at the scene of the crash,” said an official at the local emergency medical centre. Russian President Vladimir Putin “expressed his condolences to the relatives of the victims in this horrible disaster” and ordered a government commission be set up to investigate the cause, said Putin’s spokesman Dmitry Peskov, quoted by the news agency Interfax.

The Investigative Committee said an inquiry had been opened to determine whether there had been “violation of aviation security rules” and added that several inspectors had been sent to the scene of the crash.Pilot error was one of three preliminary lines of inquiry, along with weather conditions and technical failure, said Committee spokesman Vladimir Markin, quoted by Interfax.

Kazan airport was temporarily closed, the agency said. Air safety in Russia is a major issue for the authorities following a severe deterioration in the quality of domestic services after the collapse of the Soviet Union. Officials blame most problems on pilot inexperience as well as poor maintenance by the small and poorly regulated airlines that have sprouted up across Russia in the past two decades. -Dawn