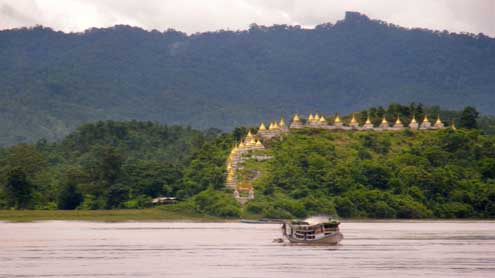 After closing its doors to the West for half a century, Myanmar has reopened, inviting all to come and discover its treasures, ancient palaces of kings long gone, legends and mysteries told in stone.

And the world is expected to come.These are the early days, perhaps the best, and with ill-equipped roads and railways, there is no better way to explore than by river. Public ferries crisscross through glistening green paddies; old teak fishing boats can be rented by the day. And now, there is the luxury riverboat cruise. In late July, the Orcaella made its maiden voyage on a 1,600-kilometer journey deep into Myanmar’s interior, almost to the border of India. It is operated by the Orient Express, the group that runs luxury hotels, trains and boats globally.

It’s not a handsome ship from the outside. As the cruise’s first 30 travellers board in Mandalay, it seems squat and square and a bit worn out. But once we step over the gangplank and enter the roomy lounge, our impression changes completely. Totally remodelled from the hull up and gracefully furnished, it is a space where all of us immediately felt relaxed. Over the next 12 days we will tour sights rarely seen by foreign tourists: villages left back in time, gilded pagodas filled with Buddhist statues, thousands of them long neglected.

My cabin is spacious, with hardwood floors, fresh flowers and a walk-in closet. Best of all are the glass sliding doors facing the wide river, where one can lie in bed and watch the world glide by. We travel first for six hours along the mighty Irrawaddy River, more than 400 meters (yards) wide. The shores are almost level with the land, the brush low with a few large trees. Every hut or fishing boat we pass generates loud greetings. Groups of children wave and call. Water taxis carry passengers from one riverside village to the next, and huge, heavy boats laden with teak head downstream. When we reach the confluence with the Chindwin River, we meet our first obstacle. The captain slows our 25-cabin ship to a near-standstill and struggles to navigate around a small whirlpool.

The shifting sandbanks make it difficult to read the riverbed. Eventually we pass, continuing north on the Chindwin along the melted waters of the Himalayas. We slice through sandstone cliffs and patches of forest, but this is rare. For long stretches, sometimes days at a time, the view is more monotonous than I would have imagined. The first village of a decent size we come across is Monywa, where the people appear as fascinated by us as we are by them. As we walk down their dusty roads, we must look like clumsy giants.

Their own bodies look so delicate, women walking gracefully even when carrying baskets of bricks on their heads. The small, beautiful children stare in wonder. A teenage traveller snaps pictures of a little girl from the village and her 4-year-old older brother, then gives the boy a turn at the camera. Every day, we stop to visit one or more of the many pagodas, old and new. We have seen golden Buddhas towering over us, and a traditional ceremony for young, freshly shaven monks. After a few days, we reach Sittaung, a few kilometers (miles) from the Indian border. It has 35 very solid, large teak houses, all without doors and elevated on stilts. Green rice paddies are on either side.

The river is only a few meters away and floods a frequent occurrence. An old, frail woman stood by the gate, leaning with both hands on her cane, her eyes fixed upon us. She was prepared for our arrival, dressed in her finest blouse and longyi, a traditional wrap-around sarong tied firmly in a knot at the waist. I will not forget her, and our conversation in friendly gestures. I don’t think she’ll forget me, wondering, most probably, why a woman of 86 years would travel so far to see her. Her rugged village is full of welcoming smiles, along with disdainful looks from yellow dogs and water buffalo when we expected them to move. Here we turn around.

It took eight days to get here, but we will return in less than half the time, heading with the current toward our home harbour and the temples of Bagan, the first kingdom of Myanmar, also known as Burma. On our final night on the ship, elephant dancers — men in a full-sized pachyderm costume — are brought in from a nearby village. The bejewelled beast appears with its leader and begins a dainty dance that soon becomes more boisterous. We are amazed when it stands up on his front legs, then on his back.

It crosses a plank stretched between two barrels and takes a bow under enthusiastic applause, encouraged by the free flowing champagne. We politely overlook the two pairs of nicely polished shoes that poke out from under the beast’s feet. As the show wraps up, I stand up to get a better look at the lovely young singer among the musicians. Her mother, seeing my delight, smiles and beckons me to sit with her. -Khaleejtimes

Kerry to hold talks with King Abdullah on Sunday