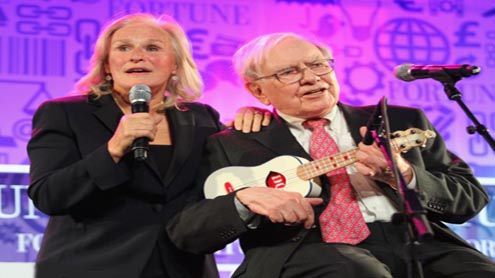 It appears that Warren Buffett isn’t just a numbers whiz – he’s also a talent at the ukelele. The 83-year-old business mogul showed off his skills backstage at the Today show on Tuesday morning and staff took out their mobile phones to record the performance.

And as he worked through his charming repertoire – including tunes from The Beatles and Frank Sinatra – he explained that he had picked up the instrument in college. ‘I just wanted to impress a girl I was keen on,’ Buffett said. ‘It didn’t work.’ He was at the Today show with his son Howard G. Buffett and grandson Howard W. Buffett to discuss their new book ’40 Chances’ when he held the impromptu performance.

As staff members chuckled with delight, he sang The Beatles’ ‘Ain’t She Sweet’ and Sinatra’s ‘My Way’. They then shared videos to Instagram. It’s not the first time he’s shown off his musical talents. He has performed at the annual Berkshire Hathaway shareholders meeting in Omaha. Then in January 2012, a short clip of him playing ‘I’ve Been Working on the Railroad’ appeared on Chinese television to celebrate the Lunar New Year. Six months later, he took part in a duet of ‘The Glory of Love’ with Jon Bon Jovi at the Forbes 400 Summit on Philanthropy. Then just last week, he performed with actress Glenn Close onstage at Fortune’s Most Powerful Women Summit in Washington, DC.

Appearing on Today after the backstage performance, Buffett said his son’s new book about his efforts to fight hunger will inspire other people to make smart choices with philanthropy. He said that one of the challenges of philanthropy is there really isn’t a competitive market to test what ideas are working, so donors have to be smart. He is gradually giving his fortune to five foundations and entrusting them to distribute it, and each of his three children run one of the foundations.-Dailymail