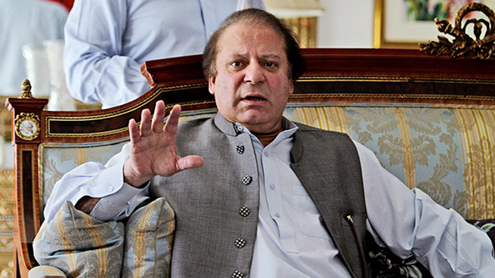 WASHINGTON, Prime Minister Muhammad Nawaz Sharif on Tuesday described Pakistan-US relationship as vital’ that had scope for building a strong  partnership, but called for ending American drone attacks on Pakistan’s territory being a ‘major irritant’ in the bilateral ties.

He was speaking at the US Institute of Peace, a think tank where the gathering included US Ambassador to Pakistan Richard Olson, Aid Coordinator Ambassador Robin Raphel, and top American experts on South Asian affairs. The Prime Minister, who is due to meet President Barack Obama on Wednesday, said the relationship should be based on mutual interest and respect. He said drone strikes were a violation of Pakistan’s territorial integrity. They were also detrimental to Islamabad’s resolve and efforts at eliminating terrorism from the country.

The drone operations, he said, had agitated and disturbed the Pakistanis. “This issue has become a major irritant in our bilateral relationship — I would, therefore, stress the need for end to drone attacks.” Contrary to perceptions, he said, Pakistan-US relations had stood the test of time.Despite the occasional hiccups, the solid foundation of this vital relationship has always weathered the occasion storms and turbulence, he added. “As democracy takes root in Pakistan, there is a scope for building a strong and stable partnership between the two countries. They should be based on mutual respect and mutual interest as so clearly articulated by President Obama in his Cairo speech.”

The two countries share perceptions and interests on a wide range of issues, including Afghanistan, peace and stability in South Asia and the Middle East, as well as extremism and terrorism, he noted Despite the planned draw down, there would be continuing need for close cooperation between the two countries, especially in Afghanistan, Nawaz Sharif emphasized. The Prime Minister also reiterated his call for greater trade access for Pakistan to the United States and invited American entrepreneurs to invest in Pakistan’s energy and other sectors. The new PML-N government, he said, was resolved to put the Pakistani economy, which it inherited in a shambles, on a strong footing.

Economic development and security  situation are interlinked, he added. He also underscored his commitment to regional peace, saying Pakistan wanted a peaceful Afghanistan and desired improvement of relations with India. He also said the United States, as it advances relations with India, would be in a position to help Pakistan and India resolve their outstanding issues. Nawaz Sharif appreciated Washington’s past role in defusing Pakistan-India tensions. He termed Kashmir as a flashpoint and saw no difficulty in resolving the longstanding dispute once Islamabad and New Delhi engage in dialogue.