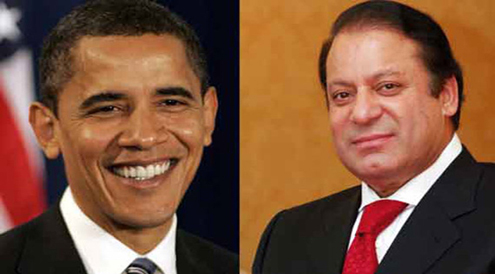 WASHINGTON, Prime Minister Muhammad Nawaz Sharif Sunday said he looks forward his meeting with President Barack Obama on Wednesday, for discussions on a wide array of subjects, as he outlined his vision for promoting peace and stability in the region to top American national security advisors at a State Department dinner on the first day of his visit.

Soon after his arrival in Washington, Secretary of State John Kerry hosted a dinner in honour of Premier Sharif, which was attended by senior Obama administration officials including Defence Secretary Chuck Hagel, National Security Advisor Susan Rice, Director CIA John Brennan and Special Representative for Pakistan and Afghanistan James Dobbins. Welcoming the Pakistani leader, Secretary Kerry expressed the confidence that the visit would provide the necessary impetus to further deepen and expand the US-Pakistan relations. Pakistan is an important country in the region and the US would be working with the democratic government of Prime Minister Nawaz Sharif in all areas of bilateral relations under the revived mechanism of the Strategic Dialogue, the Secretary stressed.

He further appreciated the bold decisions taken by Prime Minister Sharif for reviving the economy and overcoming the energy shortages. Prime Minister Sharif noted that he looked forward to meeting with resident Obama at the White House on October 23. This would be the first summit level interaction between the two countries after the historic democratic transition in Pakistan. Nawaz Sharif reiterated his determination to revive the economy and improve the law and order situation in Pakistan. Outlining his vision of promoting peace and stability in the region, Prime Minister Sharif emphasized the need for working together to meet the common challenges of extremism and terrorism. Other matters of mutual interest including regional stability and situation in Afghanistan were also discussed during the dinner meeting, the Pakistani embassy said. Prime Minister Sharif was accompanied by Advisor to the Prime Minister on National Security and Foreign Affairs Sartaj Aziz, Finance Minister Ishaq Dar, Special Assistant to the Prime Minister on Foreign Affairs Syed Tariq Fatemi and Foreign Secretary Jalil Abbas Jilani.

Meanwhile, the State Department said Secretary Kerry welcomed Pakistani Prime Minister Nawaz Sharif to the Department of State for the first bilateral visit of his term following Pakistan’s historic first transfer of power between democratically elected civilian governments. “Secretary Kerry’s meeting with the Prime Minister is their third in three months, and continued the robust dialogue on our shared goal of a stable, secure, and prosperous Pakistan,” a statement issued after the long dinner meeting said. Discussions covered a broad range of domestic and regional issues, including peace and security, counterterrorism cooperation, collaboration on Pakistan’s energy sector, increasing bilateral trade and investment, and the common interest in a secure and stable Afghanistan.”

The office of the State Department Spokesperson said “both sides agreed on the importance of our continued counterterrorism cooperation, and that extremism is countered in part by opportunities arising from greater economic stability.” “To that end, the US, Pakistan’s largest trading partner, remains committed to an economic relationship increasingly based on trade and investment,” the statement added. Earlier,  Secretary Kerry highlighted the vitality of US-Pakistan relationship while warmly welcoming Prime Minister Nawaz Sharif to the State Department at the start of the Pakistani leader’s four-day visit. “We’re very happy to have you here,” Secretary Kerry said to Prime Minster Sharif in the presence of reporters before the dinner meeting.

He noted  that the Pakistani leader is visiting Washington for the first time since his last trip in 1999. The US “relationship with Pakistan could not be more important”, Kerry said while underscoring Pakistan’s vital significance to regional stability, as the democratic country addresses the challenges of economy and insurgency simultaneously. We have a lot to talk about and the relationship with Pakistan could not be more important.  On its own, a democracy that is working hard to get its economy moving and deal with insurgency and also important to the regional stability,” the US diplomat said. On importance of the prime minister’s visit to the bilateral relationship, the top American diplomat said, Prime Minister Sharif will have a series of high-level meetings including discussions with Vice President Joseph Biden and President Barack Obama at the White House on Wednesday. “We’re very anxious to have a series of high-level, important discussions over the course of the next few days “the Vice President, the President, (and) tonight’s dinner,” Kerry remarked. -App