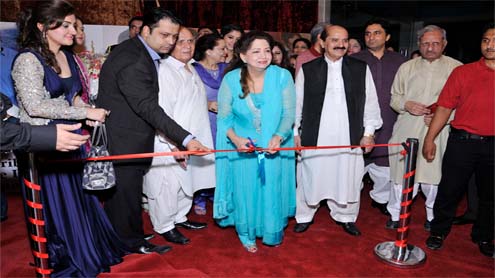 The grand launch of Super Cinema Shabistan took place on 22nd August, 2013 at the Shabistan Cinema premises located at the historic Abbot Road, with the premier of the already famous movie MAIN HOON SHAHID AFRIDI.

The occasion was graced by the leading stars of the movie; Humayun Saeed and Mahnoor Baloch. Also present at the event was Madam Zeba who performed the ribbon cutting to declare the Super Cinema Shabistan Open. A befitting tribute was paid to our legendary super star Mohammad Ali, at the launch.

Super Cinema Shabistan and Prince bore a totally new look, technically and otherwise. From the technical angle, the sound speakers are state of the art while the 3D installed is as good as the IMAX. The new silver screen which has replaced the old massive screen of 60 ft of the past adds and enhances the viewing joy. The theatre is fully air-conditioned, the seats most comfy and visual magic of the 3D digital screens much visible. As for the allied features, the high powered generator will ensure uninterrupted viewing. Another big attraction for families will be the food court.

Seating capacity of the two cinemas is around 600 with hall, gallery and boxes giving a feel of elegance. These cinema facilities are operating under the banner of Super Cinema Shabistan and Prince and very much apparent is the modern outlook without compromising on the grand aspects of the single screen cinema. From the word go, this initiative on the part of Super Cinema Management is going to revive the glory of these theatre halls. The cinemas will no longer be relics of the olden days; instead everything about them represents quality and state of the art technology. Movie goers visiting these places will find the experience breathtaking yet nostalgic.

For the convenience of the young and old alike, there will be multiple shows which means providing different options to different people. In this regard it would be important to highlight that price mechanism which is quite competitive and affordable. For pre 3pm shows the ticket range will be in the Rs150 bracket on the lower end and Rs250 at the highest level. Further, traditionally these cinemas have never played Hollywood stuff but now the choice of English movies will also be there.There is enough space for parking of over 100 cars and multiple new entrance gates facilitate and ease the in/out flow of traffic.

The development in a very short span of time has also created a lot of job opportunities not only at the managerial level but also technical and support staff level.The cinemas aim to provide a complete Family Entertainment and to ensure a healthy and entertaining environment for all segments of the society.  A feature that needs to be highlighted is that Super Cinema Shabistan will be the largest Digital 3D Cinema hall in Pakistan.