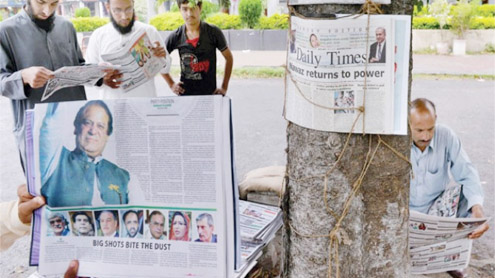 One of the most significant outcome of May 11 elections is the emerging trend of regionalism in Pakistan’s politics.

The election results show that no political party has succeeded in establishing its credentials of a national party having roots in all the provinces.Until the May 11 polls, the PPP was the only party which could claim to be the party having its support base in all the four provinces. The 2013 elections have snatched this title from the PPP which has been confined only to Sindh, making it a regional party.While the 2013 elections have deprived the PPP of its national character, the PML-N also seems struggling to improve its image of a regional party with little backing outsidePunjab.

The fact that PML-N would now be forming its government in the Centre as well as inPunjabdoes not give it the status of a national party. It is mainly because of its strength inPunjabwhich has got almost 60 per cent of the total seats in the National Assembly. Its presence in Sindh, Balochistan and KPK is negligible.If a vast majority of the electorate voted for the PML-N inPunjab, a fairly large number voted in favour of the PPP and MQM in Sindh with the PML-N and other parties having small share in this part of the country. Though the PTI has also created its vote bank inPunjab, it has a long way to go to challenge the might of Sharifs in the province.

In Khyber Pakhtunkhwa (KPK), the PTI of Imran Khan has emerged as the single largest party in the Provincial Assembly.The two major political parties, the PPP and the PML-N have little presence in this province.Though there are indications that JUI-F headed by Maulana Fazlur Rehman and PML-N of Nawaz Sharif may form a coalition government there along with the independents, the fact remains that PTI is the single largest party in the KPK Assembly. Similarly, the PTI is no where in Sindh and Balochistan. The PPP has not only been wiped out ofPunjab, it has also lost its popularity in KPK and Balochistan.

In Balochistan, no party can form its government single-handedly because of the split mandate.When the PTI made its presence felt in Punjab by holding big public rallies much before the elections, an important topic of discussion was that which of the two major parties, the PPP or the PML-N would be affected the most because of Imran’s growing popularity. Many had thought it would be the PML-N since the PTI itself had based its election campaign on anti-Nawaz posture.

Though Imran Khan would also criticise the PPP in his speeches, Nawaz party remained his main target throughout the electioneering. The PPP was also happy that PTI would erode the vote of the PML-N and its candidates would reap the benefits. Even the PML-N itself was much worried about such an eventuality.But this did not happen. While the PML-N increased its vote bank, the PTI created its own. As the PPP lost its support inPunjab, the PTI and the PML-N were the beneficiaries.

It was also being said that a bigger turn out, if happened, would place the PTI in a prominent position. The turn out was greater compared to previous elections, but it was to the advantage of the PML-N more than to any other party.Another important aspect of the May 11 elections is the fact that unlike in other provinces, the voters in Sindh have voted for the PPP irrespective of its bad performance both in the Centre and the province in which it had its government.The May 11 elections also witnessed demise of the PML-Q whose downfall had started in 2008. It seems to have lost its relevance in country’s politics.

The Awami National Party, which ruled over the KPK province until March 2013, has also disappeared from the scene. But analysts believe that it has the capacity to rise from the ashes at some stage in the future because it has roots in the masses unlike the PML-Q which was considered only a party of electables. But not any more.The 2013 elections have also broken the myth that it is always the ‘pro Bhutto and anti-Bhutto’ vote in action in all the elections.

Except for the Sindh province where the people still have emotional attachment with the Bhutto family, this phenomenon was not witnessed elsewhere. It seemed the people have voted for parties on the basis of their performance instead of any ideology.The PPP failed to cash in on theSouth Punjabprovince card it thought would benefit it in the elections.All the three sons of former Prime Minister Syed Yousuf Raza Gilani alongwith his brother lost their seats fromMultan.And this has happened despite a lot of development work carried out by the former Prime Minister in his home town.The PPP candidates also faced defeat in other parts of South Punjab. – Nation