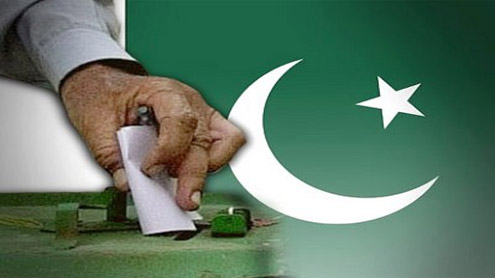 ISLAMABAD: Heavyweights-studded Rawalpindi Division – known as a recruiting ground for the personnel of armed forces has gained prominence for being the only division of the country where heavyweights, especially former prime minister, deputy premier and potential prime ministers have locked horns with their rivals.

Former Prime Minister Raja Pervez Ashraf is contesting the election on NA-51 of Rawalpindi District mainly comprised of Gojar Khan Tehsil. He is fighting the election on Pakistan People’s Party Parliamentarians (PPPP) ticket and will face Raja Javed Akhlas of Pakistan Muslim League-Nawaz (PML-N).Raja Pervez, who won this seat in the last two elections is again hoping to secure this after Ch. Riaz, a stalwart of PML-N in the area threw his weight behind him after developing differences with the party when he was denied the ticket which was given to turncoat of PML-Q, Raja Javed Akhlas.

Though Pakistan Tehreek-e-Insaf also fielded a candidate, the main contest is likely to be between the two Rajas of Gojar Khan contesting on the ticket of PPPP and PML-N.Rawalpindi district has another important seat where Imran Khan is facing Hanif Abbasi of PML-N and the seat rises to significance when loyalists of Imran Khan are seeing him as the future prime minister of the country and he himself is claiming to clean sweep the country in the general elections, scheduled for May 11.Imran is contesting on NA-56 with the support of Sheikh Rashid Ahmed of Awami Muslim League (AML) and despite being a stronghold of PML-N a tough contest is expected between Imran Khan and Hanif Abbasi.

Ch. Nisar Ali Khan, a stalwart of PML-N and former opposition leader is also contesting the elections on two seats of Rawalpindi districts. In parliamentary democracy, opposition leader is believed to be prime minister-in-waiting and if seen in this context, the future prime minister is also vying on two seats to reach in the assembly.Nisar is taking on Ghulam Sarwar Khan of PTI on NA-53 and a close fight is expected between the two. On NA-52 he will face Raja Basharat, a joint candidate of PPPP and PML-Q.

Former deputy prime minister Ch. Pervez Elahi is also testing his luck in this division and contesting the election on NA-61 Chakwal besides in Gujrat, his hometown. He will have close contest with PML-N’s Sardar Mumtaz Tamman and is relying on massive development funds he spent in this constituency during his stint as deputy premier in the last democratic government. – DailyTimes