Dark horse may get advantage in conservative NA-48 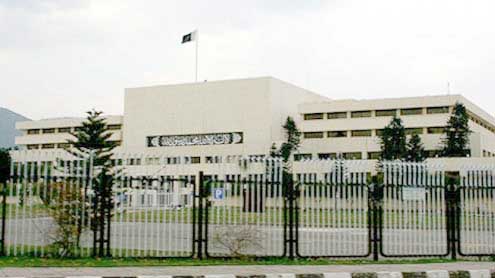 Dark horse may get advantage in conservative NA-48

A vote bank divide among PML-N, PTI and Jamaat-e-Islami (JI) makes this constituency anybody’s game. Results of elections 2008 turned this constituency into a PML-N stronghold, but re-entry of JI strong candidate Mian Mohammad Aslam into the election fray, has added a new yet interesting dimension to the contest. Though not tested yet, a good fight from PTI can lead to right wing voter divide that could brighten PPPP’s chances of becoming a dark horse.

Despite being a federal capital constituency, the electioneering in NA-48 is yet to pick momentum and only Mian Aslam is leading the race at present with corner meetings while PTI President Makhdoom Javed Hashmi, PML-N’s Anjum Aqeel Khan and Faisal Sakhi Butt of PPP are legging behind.It is commonly stated about the urban population of the NA-48, one of the two important constituencies of federal capital, would have a vital impact on the results elections. At least, 75 per cent of the total voters of NA-48 hail from urban areas, while 25 per cent of voters reside in rural areas like Golra, Sangjani, Tarnol and other villages.

In this constituency a number of government employees residing in sectors G-7, G-8, and G-9 and the remaining civil servants are living in sectors I-8, I-9, G-10 and G-11. While, the business community is spread in different sectors of the federal capital.Mian Aslam, who is confident to take seat from Islamabad’s constituency after a decade, claimed that despite being out of parliament he served the people of his area. “Vote is divided as seat adjustment could not take place with main parties including PML-N and PTI,” said Aslam talking to TheNation, who is enjoying seat adjustment with Dr Abdul Qadeer Khan’s Tehreek-e-Tahfuz Pakistan (TTP).

Aslam defeated Dr Babar Awan from NA-48 by more than 12,000 votes in the 2002 general elections. However, JI’s decision to boycott 2008 elections is also believed to have a negative impact on party position in this constituency.“Mian Aslam was not out of sight even after his party’s boycott in last election. He attended funerals or wedding ceremonies during the last five years, which will comparatively strengthen his position,” said Abid Ali, a JI supporter. Another strong contestant from the constituency Anjum Aqeel Khan is currently facing opposition even from his own party members. Though he was awarded ticket to contest elections a bit late, his campaign comparatively gained momentum in a week.

Anjum enjoys support of Gujjar and Awan castes in rural areas, especially in Sangjani and Tarnol. Anjum defeated Dr Israr Shah of PPPP with heavy margin in 2008. He got stigma of his alleged involvement in a land scandal of billions of rupees and the incident of his escape from police station with the help of his supporters. As per the 2008 elections, Anjum got 61480 and his opponents including Rizwan Sadiq (PML-Q) and Israr Shah secured 10,483 and 26,485 votes respectively.

In a visit to NA-48, mixed opinion was heard about PML-N candidates as those who had tilt toward for Nawaz led party said scams and scandals are linked with almost all parliamentarians but “the thing matters what he did for you in five years”.“We are confident about Anjum’s victory,” said a group of shopkeepers from urban area of the constituency, but at the same time some voiced totally against him for his work from some specific group and the incident of his fleeing from police station.

Talking to this scribe, Anjum Aqeel Khan said he was comparatively much strong in rural areas of his constituency and this factor would help him win election. “I have some criticism and opposition from even my own party but a lot of things are going in my favor,” he said, admitting the vote bank of PTI could be second in the race.It is relevant to note here that both JI and PML-N face big challenge of PTI President Makhdoom Javed Hashmi, who is yet to start aggressive campaign from NA-48.

Hashmi is stated to be banking on popularity graph of Imran Khan and mainly focusing on his Maultan constituency started campaign around two days before in NA-48. The PTI, which is considered to focus on ‘young and women’ vote bank, has now focusing on these two important factors. “Hashmi is a senior parliamentarian and good politician but alien in this constituency,” said a government servant, adding that his presence and work could only attract voters which is not on ground.

At the same time, a group of young and old voters from same constituency were saying that PTI would not win with big margin. Hashmi has got an impression that if he wins the 2013 elections, he might vacate this seat as he did in 2008 polls, when he vacated NA-55 seat from Rawalpindi. Hasmi’s voters are also awaiting PTI’s chief public meeting in their areas, which is believed to be fruitful to gain votes.The former ruling party’s PPP candidate Faisal Sakhi Butt, a famous businessman from this constituency, has started his campaign around two weeks before. “Butt is only focusing on urban area of the city whereas the vote bank of rural area is more than double,” said resident of industrial area, adding that there was need to focus on rural areas of the city to secure seat.

“My situation is much better in constituency both in rural and urban areas,” said Faisal Sakhi Butt, talking to TheNation, adding that although NA-48 is right wing constituency yet the vote will distribute and PPPP will get advantage. The PPP in 2008 got over 26,000 votes when Israr Shah was contesting from PPP’s ticket. “The situation is bit different this time, as PPP’s performance did not remain satisfactory during the last five years,” said residents of Golra areas. They giving the reference of alleged Capital Development Authority’s (CDA) misappropriation case opined they this stigma would have negative impact for him.

Whereas, a large number of residents from Islamabad’s posh sector put their weight behind Faisal Sakhi Butt, saying that he has strong position to win upcoming polls. Talking to this scribe, an independent candidate and former MNA J Salik said he was contesting in election with the hope that people would cast ‘conscience’ vote. “I have served masses and believed that they would vote me to win this elections,” he added.It is relevant to mention here the candidates from PML-N and JI for the first time would face each other in this constituency. According to the statistics of the Election Commission of Pakistan (ECP), the total registered voters in both the constituencies of NA-48 and NA-49 are 614,176 – 330,777 males and 283,399 females. – Nation