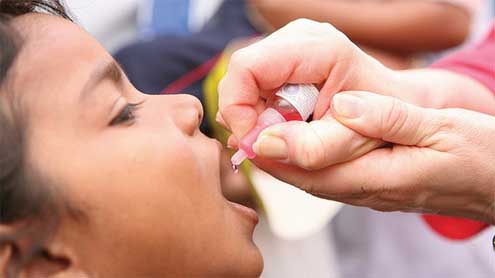 KARACHI: Hundreds of scientists, doctors and other experts from around the world launched the Scientific Declaration on Polio Eradication.

Declaring that an end to the paralysing disease is achievable and endorsing a comprehensive new strategy to secure a lasting polio-free world by 2018. A statement said that the declaration’s launch coincides with the 58th anniversary of the announcement of Jonas Salk’s revolutionary vaccine – the Microbiologist who had developed the first polio vaccine.

It said that more than 400 signatories to the declaration urged governments, international organisations and civil society to do their part to seize the historic opportunity to end polio and protect the world’s most vulnerable children and future generations from this debilitating but preventable disease. The declaration calls for full funding and implementation of the Polio Eradication and Endgame Strategic Plan 2013-2018, developed by the Global Polio Eradication Initiative (GPEI). With polio cases at an all-time low and the disease remaining endemic in just three countries, the GPEI estimates that ending the disease entirely by 2018 can be achieved for a cost of approximately $5.5 billion.

“Pakistan is making progress towards polio eradication with only 58 cases last year, a decrease of more than 70 percent from 2011’, said Sania Nishtar, Federal Minister for Science and Technology, Information Technology, Education and Training in the Government of Pakistan. “However, big challenges remain to be tackled including improving accountability mechanisms, overarching coordination of the polio programme as well as ensuring the safety of health workers. We need to overcome these bottlenecks to ensure that Pakistan becomes polio free’. – DailyTimes

Once a landlord’s serf, a woman enters election fray