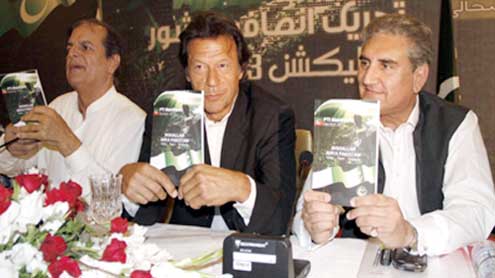 ISLAMABAD: Pakistan Tehreek-e-Insaf (PTI) on Tuesday unveiled its 12-point election manifesto ensuring justice and equal opportunities to all segments of the society, making Pakistan an Islamic welfare state as envisioned by Quaid and Iqbal, uprooting of all sorts of injustices and exploitations, introducing a sovereign foreign policy based on friendly ties with all states on the basis of transparency, mutuality of interests and respect for sovereignty.

“All governance in cities and towns will go to the Municipality and the city government will raise independent revenue for city development.Primary healthcare for the poor and elderly will be free.The policy of fighting war for others and act as a surrogate for any power will not pursue any further.Nation building will be a priority and its natural resources will be exploited for development of the country and also benefit the people living in resource rich area.

Pakistan’s strategic location will be used to strengthen the nation by becoming a lucrative trade and energy corridor and take economic advantage of it,” said the PTI chief Imran Khan while outlining the party’s manifesto which has been for the first time developed by any political party of the country with feedback from experts and professionals.PTI President Makhdoom Javed Hashmi, Vice Chairman Shah Mahmood Qureshi, Asad Umer, Shafquat Mahmood, Jahangir Tareen, Dr Shireen Mazari, Imran Ismail, Naeem-ul-Haq, Dr Israr Shah, Faisal Javed Khan and others were also present on the occasion.

“It is not possible for those parties to bring reforms in the country who have themselves devastated the country,” he said, adding that two major political parties have taken many turns of the government but never brings reforms in the government departments.These parties have not allowed the shifting of power to local level. “PTI will transfer power to grass root level by holding local government elections in three months time after coming to power,” he said, adding that other political parties have not taken such steps just to hold the funds in their own hands.

Imran Khan said that corruption has become the major issue of the country and the PTI would wipe out this curse within 90 days after coming into power, adding that the PTI’s manifesto was not base on slogan but it was formulated after case to case study, so there should be no ambiguity about its implementation. He added that power outages would be brought to end within two to three years.He said that the defense spending would be rationalized and the defense budget would be debated in Parliament, with in-camera sessions according to the sensitivity of the issue.

“PTI also recognizes the scourge of terrorism and its devastating effect on Pakistan in the form of intolerance, fear and hate, hence, it stands committed to fight for the betterment of Pakistan,” said Imran Khan, adding that agriculture reforms would also be put in place and 15 percent agriculture tax would be introduced on land holding exceeding 50 acres while domestic industry would be encouraged and flowered.

“We will computerize all the land-related data and the infamous patwari system would be replaced with computerized system to facilitate the community,” said Khan, adding that his party seeks to establish a social and political order in Pakistan where equal opportunity exists for each citizen in every walk of life. Justice ensures women, minorities, the poor, the dispossessed and disadvantaged are not exploited and discriminated by the powerful, he added.

“PTI is the Party of the ordinary Pakistani, elected representatives from the grassroots up to the Chairman and it stands committed to providing better future to the people of Pakistan. PTI stands for an effective government with merit and the legacy of misrule and misery by corrupt inept elite will become history. We have a mission to build a Naya Pakistan on Iqbal’s dream and Jinnah’s vision – encapsulated in an Islamic Welfare,” he added.

Khan said that the PTI had delivered its commitments from intra-party elections by giving over 35% electoral tickets to youth and new faces. It is in this mode of delivering to the people that PTI is committed to, he maintained. “PTI will ensure a move towards the achievement of a welfare state where every citizen can live in peaceful security and prosperity with no discrimination,” he said.Khan said that in order to make Pakistan a welfare state, one system of education for all its citizens would be ensured besides equal opportunity and healthcare and a social safety net for the unemployed. In addition, primary healthcare for the poor and elderly will be free,” he added.

He said PTI has focused on policies for the Minorities, Labour (including agricultural), Youth, Women, and Persons with Disabilities to ensure no discrimination. PTI also recognizes the Overseas Pakistanis as a valuable asset for the country and has outlined a policy for improving their access to Pakistan and its development.”Economic policy will be governed in a way to promote fast-paced industrial growth and ensure job creation. It will ensure that minimum wage of labor is commensurate with the inflation level in the country. To fast track development within the first 100 days, PTI’s will take full advantage of the natural resource of the country like copper and coal”.

Imran Khan said that for the first time in history any political party has formed a detailed policy on the basic issues being faced by the country, adding that other political parties have no match with our policy.He said that the PTI has fulfilled all its promises made with the public. “For the first time in country’s history, PTI hold fair intra party elections. “PTI has not been doing politics for the sake of power whereas the other parties were taking every step just to come in power again,” said PTI Chairman.

Imran Khan said that the PTI was not depending upon electables whereas the other major parties are dependent on electables who always blackmail these parties by making forward blocks. He made it clear that PTI have unveiled its manifesto after thorough study. “We have thoroughly studied the topic of corruption after which we announced that after coming into power PTI will wipe out the corruption within 90 days,” he said.Replying to a question, Imran Khan said that PTI’s popularity graph has gone up after the public gathering of March 23rd.