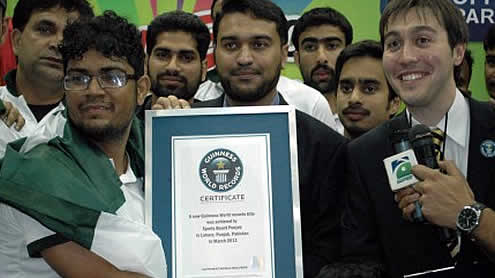 GWR adjudicator Carlos Martinez, arrived Lahore on Monday night, to adjudicate nine attempts on day one of the attempts but due to the shortage of time the youth could attempt only six GWR to get their name registered in the GWR from the platform of Punjab Youth Festival. Last year in December Pakistani youth set 11 new marks for GWR.

Talking to media, Martinez expressed his delight to be in Lahore to adjudicate Guinness World Records. “It’s in our (GWR) DNA to set records in the world and I congratulate the Punjab Youth Festival organisers for setting a field for new GWRs. I wish them best of luck,” he said while talking to media on Tuesday..

The team set the record in their third attempt after there were fouls in their previous two attempts in which they made 46 and 45 passes respectively while GWR had set at least 30 passes in a minute to be attempted and the hockey team of SBP easily passed the mark.

In the second GWR attempt, the farthest dribbling of the hockey ball was done by the same bunch of players with only one change in which Ali Butt was rested and Sarfraz was sent in to complete the record in three minutes. They all carried the ball dribbling to a distance of 979.2 metres when Guinness set 600 metres distance as the minimum space for them to cover.

Mohammad Rashid of Karachi opened 40 bottles caps with his head in one minute. In one of the most fascinating attempt Rashid broke the previous record of 24 set by Germany’s Ahmed Tafzi.

In the most number of continuous badminton passes in one minute, Mohammad Wajid and Atique set 123 continious passes record when the target of 30 passes was set by GWR.

And in the last attempt of kicking coconuts off the heads in one minute, Mohammad Rashid created his second and the day’s sixth record by kicking 50 coconuts down from the head of people standing in a round.

On the other hand, fastest time to dress a male mannequin, most martial arts kicks in one hour and largest paint swatch will be taken into account on March 13 along with several more attempts.

Chief Minister XI beat Veteran XI by 19 runs in the last and third match of the Veterans Cricket of the Punjab Youth Festival played here at the Bagh-i-Jinnah’s Lahore Gymkhana Ground on Tuesday.

Director General Sports and Youth Affairs Punjab Usman Anwar was the chief guest on the occasion.

Batting first Chief Minister XI hammered 231 runs for eight wickets in 30 overs. Kamran Khan was the vital player in the building of a big total. He cracked 114 runs and got ample support from Zahoor Elahi 32 and Ali Amjad 20. Rauf Wani and Rehan Rauf shared two wickets each for 36 and 48 runs respectively.

In reply, Veterans Blues could manage to reach 212 and in the process they lost all of their wickets. Mian Parvaiz did his best to meet the requirement of the average by scoring 56 runs while Shahid Mansoor scored 45 and Zubair Butt 23. Asim Sheikh and Romail Bashir applied breaks of the flow of their rival teams score by taking four wickets and two in order giving away 42 and 36 runs respectively.