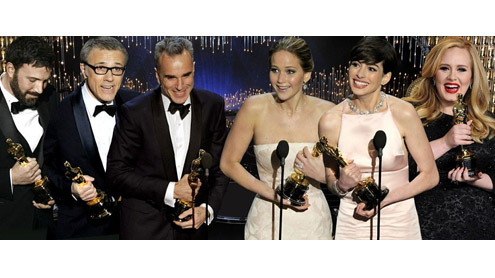 The 85th Academy Award winners have been chosen, the red carpet brought alive with a cacophony of chattering veterans and ingenues; and now the golden Oscar statues are all handed to their happy recipients.

With the great, good and exquisitely preened of Hollywood filed into the Dolby theatre it was time for dreams to made… or broken.Anne Hathaway summed up the magic of the night for those that won when she accepted the award for Best Actress in a Supporting Role for her performance as the doomed Fantine in Les Miserables by exclaiming: ‘It came true!’ as she clasped the gold statuette.Because she really did dream a dream… and it really did come true.

Hathaway, who looked incredible in Prada, wanted to star in Les Misérables aged six, and it set her on the path to becoming an actress… so it was a doubly poignant moment.She made a point of thanking her co-star Hugh Jackman, and her husband Adam Shulman. ‘It was the best moment of my life when you walked into it,’ she told the man she married in California’s Big Sur last year.The Oscar win is the apogee of a winning streak for the 30-year-old actress, who has won a plethora of honors for her short performance in the musical.

Hathaway beat Sally Field from Lincoln,who was considered her closest rival in the category.Hathaway, who starred in The Princess Diaries, The Devil Wears Prada and Love and Other Drugs was inspired to act after watching her mother, Kate, star as Fantine in a stage production.To play the role of the impoverished seamstress, Hathaway lost over 25 pounds.Argo, the popular choice for Best Picture romped home.

‘I know what you’re thinking – three sexiest producers in Hollywood,’ joked Argo producer Grant Heslov, standing with Ben Affleck on his right and George Clooney to his left.’You directed a hell of a picture,’ he added to Affleck, who was snubbed in the Best Director category.The first award of the night brought forth a distinguished quintet of nominees all vying for the Best Supporting Actor Award.It doesn’t get much better than Tommy Lee Jones, Robert De Niro, Alan Arkin, Phillip Seymour Hoffman but the gong went to Tarantino’s darling, Christoph Waltz for Quentin’s Django Unchained.

It’s his second Oscar for Best Supporting Actor in four years under the direction of Tarantino, this time as a German bounty hunter in the slave revenge tale.’We participated in a hero’s journey, the hero here being Quentin,’ Waltz said as he accepted his award.The Austrian actor first impressed the academy as a charming yet black hearted Nazi in Tarantino’s Inglourious Basterds.He was nominated while Django co-stars Jamie Foxx and Leonardo DiCaprio were not.Preened and styled to within an inch of their lives, the stars have undergone weeks of strenuous preparation for tonight’s event.

They’ve starved themselves, stood starkers for the spray-tan, had the Hollywood smile teeth touched up, the Botox injected and brutal facials that knock their cheekbones into tip top shape; and that’s just the men.Former Bond girl Halle Berry needs no such help and looked stunning as she introduced the 007 tribute by saying: ‘Bond music is a genre, all its own. Guaranteed to make your heart beat faster and take your breath away.’Dame Shirley Bassey belted out Goldfinger wearing a golden gown and won a standing ovation.

Adele took the stage later for a stunning performance of Skyfall, and then accepted the award for Best Song with typically self-deprecating candour.Quentin Tarantino won the best orginal screenplay Oscar for his film Django Unchained.’How nice to get it from you’ Tarantino said to presenter Charlize Theron and then explained to the audience that Theron is his neighbour.Host Seth MacFarlane joked that the Oscar show now in its third hour was going so slowly that they would soon start presenting the 2014 Oscars.

Ang Lee’s sumptuous Life of Pi was then recognised for cinematography and visual effects, and Disney’s Brave awarded the laurels for Best Animated Feature Film… Paperman got the nod for Short Animation.Amour, written and directed by Michael Haneke, surprised nobody by winning Best Foreign Film.A French-language drama about an elderly married couple whose lives are shattered when one has a stroke, Amour has won a brace of awards.Amour has four other nominations including best original screenplay and best director for Haneke, best picture, and best actress for 85-year-old Emmanuelle Riva.

The atmosphere is always tense inside the strangely ordinary theatre on the seedy end of Hollywood Boulevard at this award show of award shows, and the fact that all alcohol is banned during the ceremony – unlike the Golden Globes – only adds to the jagged sense of anticipation in the stuffy air.A glorious host of guest presenters got to enjoy the night’s proceedings without the stress of awaiting their fate.Jennifer Aniston and Channing Tatum showed the world what could have been as they paired the impressive genetic blessings, while Michael Douglas and Jane Fonda proved that Oscar isn’t the only comely golden oldie around.

Michael’s wife, Catherine Zeta-Jones, performed her All That Jazz number from Chicago.Dustin Hoffman, Charlize Theron, Hall Berry, Jessica Chastain, Jennifer Garner, Renee Zellweger, Kristen Stewart and Daniel Radcliffe all got their moment on the stage but it was the First Lady, Michelle Obama, who got to present the Best Picture award by way of a bit of nifty footwork from Jack Nicholson.Family Guy creator Seth MacFarlane’s stewardship went some way to combating the inescapable stress of a night that makes and breaks careers like no other but as the roll call of winners (and therefore even more losers) got underway on Hollywood’s biggest night of the year… there were plenty of rigid smiles and disappointed eyes.

Argo headed into Sunday’s Oscars as almost everyone’s favourite for best picture, and took home the laurels with a tearful speech from Ben Affleck.Ben Affleck’s 1970s Iran hostage drama was also produced by George Clooney.Barbra Streisand also gave a wonderful rendition of The Way We Were.Affleck’s Argo had won most of the big awards in the run up on to the big night; including the Screen Actors Guild Award for Best Picture which is thought to be the clearest indicator of Oscar success.

The critically acclaimed movie – which was also a massive box office hit – also walked away with the Producers Guild of America, the Writers Guild of America and the Directors Guild of America, which gave Affleck its top prize for directing the film.But Affleck didn’t pick up the directing trophy as he wasn’t nominated, meaning that Argo is the first film to win without its director being nominated since 1989’s Driving Miss Daisy.This years films have been more popular than the Academy is used to, six of the nine nominees have grossed more than $100 million the US and they’re hoping that they can draw in a younger audience with the hit movies, and the edgy hosting fulcrum that is MacFarlane. – DailyMail