Rihanna Relaxes in a VERY low-cut monokini after wild shopping 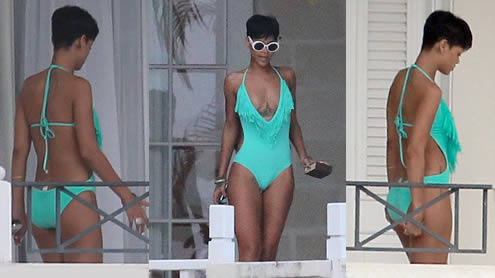 It was no surprise that Rihanna was in need of some R&R after the busy day she’d had. Just hours after being mobbed on the streets of Barbados as she did some holiday shopping, the star returned to her luxury villa Friday for some much needed relaxation.

The Diamonds singer quickly changed into an aquamarine low-cut monokini that left little to the imagination. The 24-year-old paired her fringed outfit with bright white vintage-style sunglasses as she relaxed with her best friend, who accompanied her on the trip.

The Umbrella singer was initially rumoured to be vacationing with on-again, off-again boyfriend Chris Brown but instead chose to return with her best friend for her annual end of the year return to her home. Rihanna, who was raised on the small Caribbean island before coming to the United States as a teen to launch her music career, arrived in Barbados late on Tuesday and is staying at the luxurious Cove Springs Villa. Earlier in the day RiRi was mobbed as she took to the streets of Bridgetown, Barbados to finish up her holiday shopping at local shops. The superstar has been so busy promoting her new album Unapologetic – for which she performed in seven capital cities in seven different countries in seven days – that she accidentally left her present buying until the last minute and is panicking about what to buy her youngest brother Rajad.

She said: ‘I’ve not started, not a single thing yet. I’m so drenched in work for my new album Unapologetic … The most difficult is my little brother  cause he’s getting to an age where toys aren’t fun anymore. What shall I get my bro? Any 16 year olds, tweet me.’ Rihanna, who announced she was definitely split from former flame Chris Brown this week, doesn’t want your average gift for Christmas and is praying instead that her 2013 Diamonds World Tour will be a huge success. Speaking to Britain’s OK! magazine, she insisted: ‘I want a sold-out Diamonds World Tour. That’s what I really, really want. I want that so bad.’

Another thing that won’t be on Rihanna’s wish list for Santa this year is a baby, because the Only Girl In The World hitmaker is focused on getting the most out of her career first. Asked whether she wanted a family within the next five years, she said: ‘Definitely not in five years! Eventually I want a family. God has a way of working things out the way he wants to and you have no say in that.’ – Dailymail

Highlights of Book on four Years of Government’s Performance