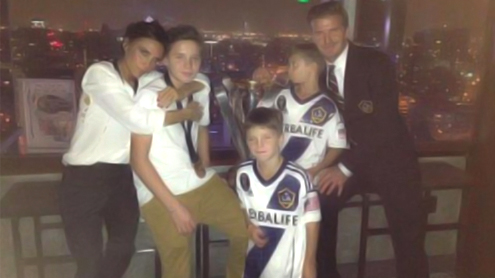 They’ve been married for the last thirteen years and one thing’s for sure – David and Victoria Beckham are still as in love as ever.

Despite having been dogged by rumours of marriage problems over the course of their relationship, the pair looked smitten as they enjoyed some family time over the weekend following David’s final LA Galaxy match.David was seen embracing Victoria in a passionate cuddle before affectionately kissing her as their sons looked on.The couple were on their way out of a hotel with their brood following the final match.And they looked the picture of happiness as Victoria draped her arm over David’s back and shoulders while he put his arm around her waist and the top of her derriere.

Even eldest son Brooklyn looked slightly embarrassed at his parents’ public display of affection.But he’ll be no doubt happy to see them so strong following a tumultuous year which saw David accused of an alleged affair with opera singer Katherine Jenkins.As David Beckham ended his five-year stay at LA Galaxy with a victory in true Hollywood style, his wife Victoria and their four children stood proudly on the sidelines.

Victoria held daughter Harper while Brooklyn, 13, Romeo, 10 and seven-year-old Cruz cheered on their dad as he lifted the MLS trophy in dramatic fashion after his team won the match.And the football legend even brought his three beaming sons onto the pitch with him before the game started for some extra good luck.Speaking to his fans after the victory, the star admitted he was sad to say goodbye to the team he has been a part of for six years.

‘It is a special day for us to win it here at our home, in front of our home fans,’ said an emotional Beckham, who again hinted that he would soon be involved in the MLS as a club owner.‘It is a sad day as well. This is a special place for me and will continue to be a special place.‘I have no idea where I will go next. I do know that I am happy to have been part of this club for six years and been successful for the last four years.‘I will continue with my commitment to this league. I might not be playing here any more but my commitment to growing this sport and this league will continue.’

The finale was suitably dramatic. Emerging from half-time 1-0 down to Houston Dynamo, a quick fire burst of two goals in five minutes from Omar Gonzalez and Landon Donovan and a penalty from Robbie Keane deep into injury-time ensured that the MLS Cup had a fairytale ending for the league’s most iconic player.Unlike last year when he was nursing a hamstring injury, Beckham, 37, displayed his full range of skills, launching huge 40-yard passes up the field in an attempt to conjure victory in his last game.

In addition to pinging passes, Beckham was almost able to conjure a goal from one of his trademark free-kicks, but the attempt was deflected.The home crowd unfurled banners declaring their love for Beckham and with the game in injury time with the score finely poised at 2-1, Robbie Keane was brought down in the Houston box and a penalty was awarded to the Galaxy.And Beckham was certainly given an appropriate send-off by both his fans, team and adoring family.

After the final goal sealed the victory, Beckham left the game to a raucous standing ovation from the packed stadium amid chants of “Thank you, David!”.Beckham hugged Galaxy coach Bruce Arena as well as all the other players on the Galaxy bench before the game ended moments later.The football legend streamed onto the field with his teammates and waved thanks at the fans before he was joined by his three sons, all clad in No. 23 Galaxy jerseys.The pregame rain cleared long enough for the sunny farewell to Beckham, who arrived in Los Angeles in 2007 from Real Madrid with designs on changing the American perception of the world’s most popular game.

The league has grown steadily during his tenure, with most MLS franchises on sound financial footing and in excellent stadiums, although the sport’s popularity and TV ratings haven’t matched the other American pastimes.Beckham was wildly cheered by many of the same diehard Galaxy supporters who booed him three years ago after his loans to AC Milan and an injury-riddled start to his Galaxy career.The Home Depot Center souvenir stands were loaded with Beckham shirts, including one that said ‘Take Me With You! – Dailymail