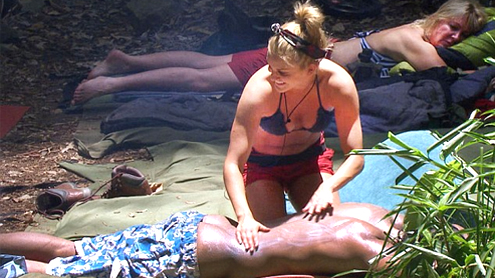 If  David Haye was looking for a personal physio in the jungle he may have just found one.

Former Pussycat Doll Ashley Roberts was seen getting very personal with the professional boxer as she gave him a massage.The two good looking celebrities sent pulses racing as Ashley helped David out on I’m A Celebrity… Get Me Out Of Here.Ashley, 31, became the envy of the nation as she got to put her hands all over David, 32, as she gave him a rather seductive rub down.David, who is married, could have asked anybody in the camp to help him cover his back with sun cream, but he wisely chose to get Ashley to do it.

The professional dancer didn’t seem to hesitate at all as she massaged the cream onto Haye’s body as he lay down on his front.As the ex pop singer squirted the cream onto his back she smiled with delight at the sight of David’s muscular and toned body.Ashley was unable to hold her back her smile as she applied the cream to every part of his back and legs.

While the other camp mates watched on and made comments Roberts burst out laughing at the slightly awkward situation.Still, that didn’t stop her from applying even more cream to David’s derriere as he pulled down his shorts ever so slightly.With the job well done, David was able to get back to his sunbathing safe in the knowledge that he was well protected.The father-of-one has proven quite a hit with female members of the audience as his well sculpted body has been easy on the eye.However, Ashley, who is currently working on her debut solo album, is also in great shape thanks to her burlesque dancing past. – Dailymail