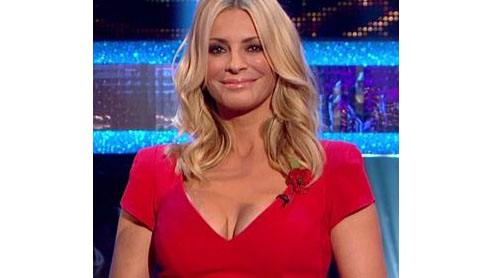 Strictly speaking, all eyes should have been on the couples dancing.But some viewers seemed to get a little distracted on Saturday night – by Tess Daly’s cleavage.

The Strictly Come Dancing presenter became a hot topic of conversation on Twitter, thanks to her low-cut red dress.Fans on the social networking site suggested that Miss Daly seemed curvier than usual, with some even speculating that the 43-year-old may have had breast enlargement surgery.

One user wrote: ‘Has Tess Daly always had big boobs? Where have they sprung from?’, while another said: ‘Has Tess Daly overinflated her boobs this week?’A third wrote: ‘Tess Daly’s cleavage is defo [sic] stealing the show tonight, even my girlfriend can’t look anywhere else!’The outfit that sparked so much discussion during Saturday’s show was a floor-length bright red gown with capped sleeves and a plunging neckline, cinched in at the waist with a black belt.

A spokesman for Miss Daly would not comment on the speculation last night.For those who were concentrating on the dancers, actor Colin Salmon became the latest celebrity to be voted off the BBC show.The 49-year-old, who danced the foxtrot with partner Kristina Rihanoff, ended up in the bottom two after his performance failed to impress the judges.He was sent home after losing out in the dance-off, with the judges unanimously deciding to save Daybreak showbusiness reporter Richard Arnold and partner Erin Boag. – Dailymail