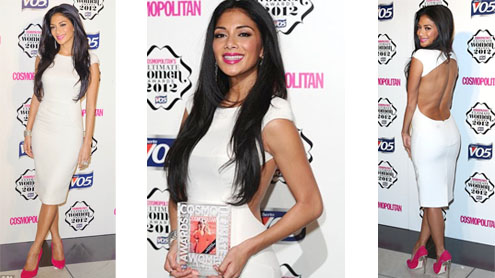 She’s fast becoming a style icon in her own right after wowing fans week in, week out with her looks on X Factor.

And on Tuesday night Nicole Scherzinger put her fashion powers to use yet again at the Cosmopolitan Ultimate Women of The Year Awards 2012 with VO5.The 34-year-old singer made a dazzling entrance wearing in a bright white dress as she arrived at the Victoria and Albert Hall, London.Nicole led the way for a whole host of stars stepping out in black or white ensembles, looks which proved popular with many of the attendees.

The former Pussycat Dolls singer teamed the figure-hugging dress with a pair of hot pink heels, a colourful addition to the ensemble.Nicole also wore a fuchsia shade of lipstick across her mouth and had her long dark tresses tumbling down around her shoulders. The X Factor judge easily outshone her colleague Tulisa Contostavlos, who failed to show off her fabulous figure to its full extent, in an unflattering canary yellow frock.

But while Tulisa may have suffered a slip in the style stakes she did manage to scoop a gong at the bash and was presented with the Ultimate TV Personality Award.As she took to the stage to accept her award, the Young singer noted: ‘For the first time in many nights I’m actually sober! Giving myself applause for that!’The X Factor judge thanked Cosmopolitan for putting her on the cover of the magazine and apologised for dying her blonde hair back to brunette just before it was published.

She dedicated the award to her PA, ‘My trusty steed Gareth Varey, who broke his leg last night and he’s still here!’Nicole was also honoured with a trophy and was named Ultimate Fun Fearless Female by the magazine at the star-studded bash.The singer’s X Factor finalists presented her with her award and she said: ‘It made it so much better to have my little pumpkins up there giving it to me. They’re just so sweet, it makes me so happy, God bless ‘em.’

There was no shortage of bold black or white looks on the red carpet and it appears many guests had a similar idea to Nicole.Tulisa’s act Ella Henderson opted for a summery white dress from River Island with lace and beaded detail, which she teamed with a pair of opaque tights and glittering heels.Heidi Range looked lovely in a flowing black gown, showing off a fishtail skirt and a plunging lace panel around the neckline, upping the ante in the glamour stakes.Team GB gold medallist Jessica Ennis stepped out in a fitted white dress with a bow detail sitting just under her bust for a stunning look.

Ultimate Newcomer Zawe Ashton wore one of the most daring dresses of the evening and she wore a design by Hussein Chalayan, the person behind Lady Gaga’s famous egg outfit.Kimberley Walsh bucked the black and white trend in a mint green gown by Brazilian designer Patricia Bonaldi.The lavish awards bash was hosted by mother-to-be Fearne Cotton.

Ahead of the ceremony the DJ said: ‘I’m so happy to be hosting Cosmopolitan’s Ultimate Women Awards. I’ve hosted for six years now, and each time we get to celebrate the most incredible women who have shown earth shattering amounts of courage, love, bravery, and strength. I’m inspired and humbled year on year.’

The pregnant Radio 1 star acted as one of the judges in the real-life categories of the awards along with Britain’s Got Talent panellist Alesha Dixon, Professor Green, Katie Piper and Karren Brady from The Apprentice.Fearne showed off her growing baby bump in a black less dress with a multi-coloured pattern and stepped out in a pair of towering fern green platform heels.While there might have been a strong focus on the fashion, the bash was held to honour and celebrate exceptional females.

The winner of the Editor’s Choice award proved to be an extremely worthy one, Stephanie Kercher, whose sister Meredith Kercher was brutally murdered in Perugia, Italy five years ago, picked up the award.Stephanie has devoted herself to supporting her parents in their fight for justice. As the only Italian speaker in the family, she has travelled back and forth to Italy to liaise with the Kercher’s legal representatives, and has given up her job and moved back to Surrey to be closer to her parents.

She said: ‘I’m very pleased to be here. I dedicated my award to my sister and I hope to keep her memory alive and keep going for her really.”My parents are very proud. It’s a nice award for everyone, especially with the fifth anniversary (of Meredith’s death) this week.’Following Britain’s triumphant Olympic summer, gold-medalist Jessica Ennis was awarded the title of Ultimate Olympian, while silver-medalist Louis Smith, currently starring in Strictly Come Dancing, was declared 2012’s Ultimate Hottie.Multiple gold medal-winning swimmer and cyclist Sarah Storey was named Ultimate Paralympian.

Chart-topping boyband One Direction were named the Ultimate Men of the year, after a hugely successful year in which they became huge in the US.Although the band couldn’t make the event, Harry Styles recorded a video message which was played to guests.He said: ‘We cannot believe we’ve been voted Ultimate Men of the Year because most people still say that we’re boys.’ – Dailymail