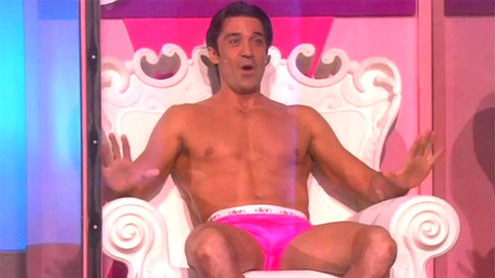 He is the latest celebrity heart-throb to impress both judges and viewers on Dancing With The Stars.

And Gilles Marini managed to whip a new audience up into a frenzy on Monday when he stripped down to a pair of tiny bright pink briefs on The Ellen Show.The 36-year-old arrived on set in a pink robe before stripping off to reveal an impressive six pack, much to the predominately female audience’s delight.

The Sex and the City star seemed more than happy to strut around the studio in the tiny neon briefs, at one point walking through the audience before positioning himself inside Ellen’s splash tank.

And as well as giving the women an eyeful of his toned torso, Gilles’s soaking was all for a good cause.In return for getting wet, Ellen and the company Litter Genie donated $10,000 to the Susan G Komen charity to launch Breast Cancer Awareness Month for October.Gilles is currently impressing viewers with his stripped-down performances on Dancing With The Stars with partner Peta Murgatroyd.

‘I think it’s going to be my part again (to dance without a shirt on),’ the French actor told The Clicker regarding his revealing outfits for this week’s shows.’I really try hard not to, but they told me, “Dude, you have no choice. We want you in the minimum.” And when they told me what my minimum would be, it was pretty much nothing.

I’m going to have the minimum amount of clothing ever. I mean, nobody ever danced that way.’But although the Mirror Ball is well within his sights, Gilles says his main intention is just to enjoy himself.’I want the public to have a great time when they watch me, no matter whether I win the mirror ball or not,’ he said. ‘For me, it’s very important to make people smile… My only wish is to make people happy when I dance and nothing else.’ – Dailytimes