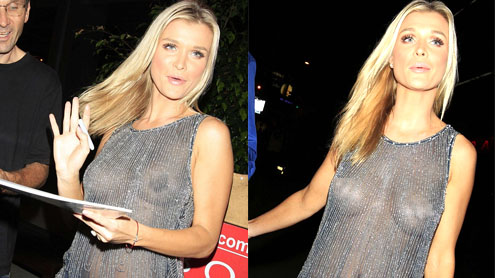 She could maybe have got away with it on the red carpet.But Joanna Krupa’s top was undoubtedly too revealing for a regular night out.

However, the Real Housewife of Miami star didn’t appear too concerned that her metallic top was entirely see-through as she dined with her fiancé at BOA Steakhouse in Beverly Hills on Thursday night. The 33-year-old seemed far from embarrassed about her lack of underwear on the evening out, while fiancé Romain Zago also appeared unconcerned about former Playboy model Joanna’s revealing outfit.

In fact, nightclub owner Zago donned a grin from ear-to-ear as he paraded his scantily clad fiancée to their waiting car.The former model and wannabe actress wore the completely sheer top featuring a few strings of sequins with skinny jeans, stiletto’s and a black leather clutch bag Polish-born Joanna is definitely comfortable showing off her goods as she previously posed naked for the famous pages of Playboy magazine, as well as for a PETA campaign in 2009.

The controversial campaign saw the blonde completely in the nude, with only a crucifix to cover her modesty.Depicted as an angel floating in a  church filled with young puppies, the message of the ad was: ‘Be an angel for animals, always adopt dogs, never buy.’ And her Thursday night out outfit – or lack off – certainly helped Joanna get more attention, as she has just joined the new season of Real Housewives of Miami, where she has been caught in an argument with fellow housewife Adriana de Moura. 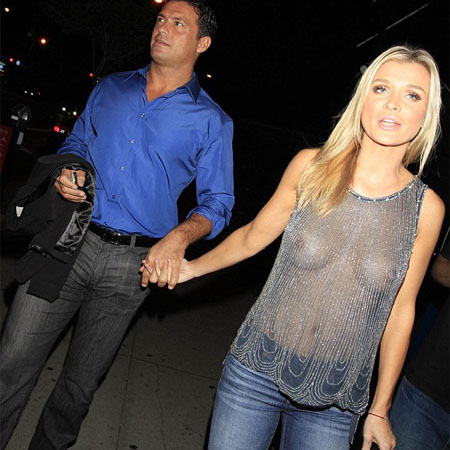 The latest episode of the popular reality show saw her laying into the fellow star and accused her of trying to flirt with her fiancé Romain.But Joanna herself denies any feuds with her fellow cast members, who have called her a diva in the past.’They all know I’m the sweetest person with the biggest heart and I love animals,’ she previously said modestly. – Dailymail